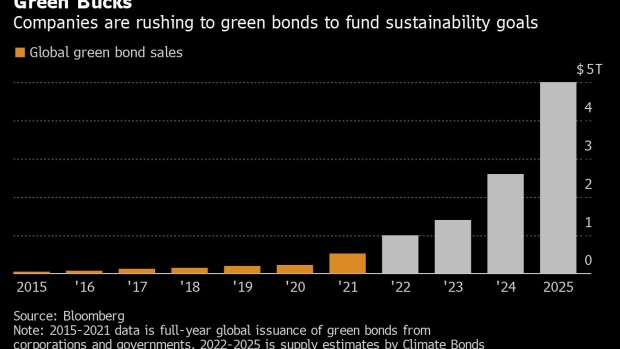 iPhone 13 smartphones in new alpine green color on display at an Apple Inc. store in Covent Garden in London, U.K., on Friday, March 18, 2022. Apple introduced 5G versions of its low-end iPhone SE and iPad Air tablet, as well as a redesigned Mac desktop computer and faster processor, kicking off what’s likely to be its most prolific year yet for new product releases. Photographer: Chris J. Ratcliffe/Bloomberg , Bloomberg

(Bloomberg) -- Jabil Inc. is selling bonds earmarked to benefit the environment for the first time as its customer Apple Inc. continues to push its suppliers to transition to renewable electricity.

The company, which makes iPhone casings, is selling green bonds in the U.S. investment-grade market, according to a person with knowledge of the matter. The five-year security may yield 1.7 percentage points above Treasuries, said the person, who asked not to be identified as the details are private.

Jabil will use the proceeds from the sale to repay its outstanding $500 million 4.7% senior notes due in September, the person said. It will also use a part of the proceeds for eligible green expenditures.

The firm intends to finance a variety of projects as well as vehicle electrification, solar, wind and green hydrogen, according to its green financing framework published this month. It has set a 2025 target to reduce its carbon output from operational greenhouse gas emissions by 25% from a fiscal year 2019 baseline.

Big corporations are under pressure to slash carbon emissions from their operations and from their supply chains, known as Scope 3 emissions. They’re also increasingly paying attention to greenhouse gases when choosing suppliers.

To fund this transition, companies and governments worldwide are rushing to the green bond market. Global issuance of green bonds reached a record $514 billion last year, according to data compiled by Bloomberg. Annual sales could reach between $900 billion and $1 trillion by the end of this year, and as much as $5 trillion by 2025, Climate Bonds Initiative, a London-based organization that sets green-bond standards, estimates.

Apple plans to transition its entire supply chain to 100% renewable energy by 2030, according to its 2022 environmental progress report. Electricity usage in its supply chain is the single greatest contributor to its carbon emissions, according to the report. The firm’s worldwide corporate operations are already carbon neutral.

While Jabil customers include Apple and Amazon.com Inc., it is also focused on secular growth opportunities in different markets including 5G, electric vehicles, cloud computing and clean energy, CreditSights analysts Jordan Chalfin and Joshua Anokye-Boateng wrote in a note on Wednesday.