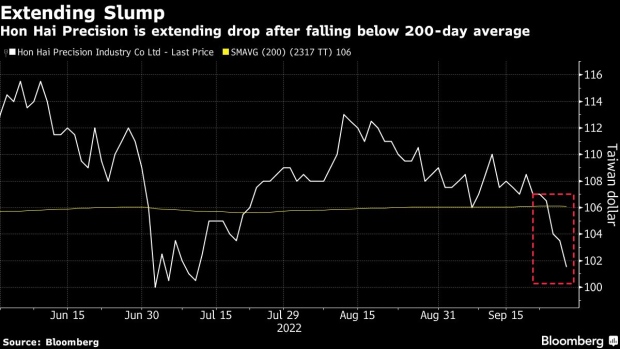 An employee puts an Apple Inc. iPhone 14 smartphone into a bag at an Apple store in Sydney, Australia, on Friday, Sept. 16, 2022. The latest iPhone hits stores today, and Apple is counting on well-heeled shoppers to make the device a hit during a year of roaring inflation and shaky technology spending. Photographer: Brent Lewin/Bloomberg , Bloomberg

Hon Hai Precision Industry Co., which assembles most of the world’s iPhones, dropped as much as 2.9% while chip bellwether Taiwan Semiconductor Manufacturing Co. fell as much 1.8%. The fall in the two stocks helped move Taiwan’s equity benchmark down as much as 2.3% to its lowest level since November 2020. Asia’s regional stock benchmark dipped about 2% amid a hawkish Fed and a strong dollar.

“Disappointing iPhone demand may reverberate throughout the supply chain, and impact tech heavy Taiwan and Korea the most,” said Marvin Chen, an analyst with Bloomberg Intelligence.

Apple has told suppliers to pull back from efforts to increase assembly of the iPhone 14 product family by as many as 6 million units in the second half of this year after an anticipated surge in demand failed to materialize, people familiar with the matter told Bloomberg News.

Instead, the company will aim to produce 90 million handsets for the period, roughly the same level as the prior year and in line with Apple’s original forecast this summer, the people said.

Among other key stocks, Hong Kong-listed lensmaker Sunny Optical Technology Group Co. declined as much as 3.7% and Taiwan’s Largan Precision Co. plunged as much as 8.8%. South Korea’s LG Innotek Co., which gets 70% of its revenue from Apple, extended its decline to 9.2%.