Apple Is Said to Tell Suppliers IPhone Demand Has Slowed

The company has told its component suppliers that demand for the iPhone 13 lineup has weakened, people familiar with the matter said, signaling that some consumers have decided against trying to get the hard-to-find item.

Already, Apple had cut its iPhone 13 production goal for this year by as many as 10 million units, down from a target of 90 million, because of a lack of parts, Bloomberg News reported. But the hope was to make up much of that shortfall next year -- when supply is expected to improve. The company is now informing its vendors that those orders may not materialize, according to the people, who asked not to be identified because the discussions are private.

The company is still on track for a record holiday season, with analysts projecting a sales increase of 6 per cent to US$117.9 billion in the final three months of the calendar year. But it won’t be the blockbuster quarter that Apple -- and Wall Street -- had originally envisioned. Shortages and delivery delays have frustrated many consumers. And with inflation and the omicron variant bringing fresh concerns to pandemic-weary shoppers, they may forgo some purchases.

That could mean skipping the iPhone 13 altogether and waiting to upgrade next year, when its successor comes out. The current lineup, which starts at US$799 for the standard model and US$999 for the Pro, is considered a modest update from the iPhone 12, which had a whole new design. Bigger changes are expected for the 2022 model, giving some shoppers a reason to wait.

Apple’s shares fell 1 per cent in pre-market trading in New York, while suppliers across Asia and Europe extended their declines after Bloomberg’s report. In South Korea, LG Innotek Co. slid 8.4 per cent, while Japan’s TDK Corp. dropped 3.6 per cent. In Europe, STMicroelectronics NV slipped 3.9 per cent and Infineon Technologies AG declined 3.1 per cent.

The iPhone is Apple’s flagship product, accounting for about half of its US$365.8 billion in revenue during the last fiscal year, and rolling out upgrades is a delicate dance. With the iPhone 13, Apple and wireless carriers unleashed aggressive rebate programs to spur purchases. In some cases, owners of an iPhone 12 or earlier models were able to buy an iPhone 13 at little to no cost. While discount programs are still available, some offer less dramatic savings than when new models first went on sale. 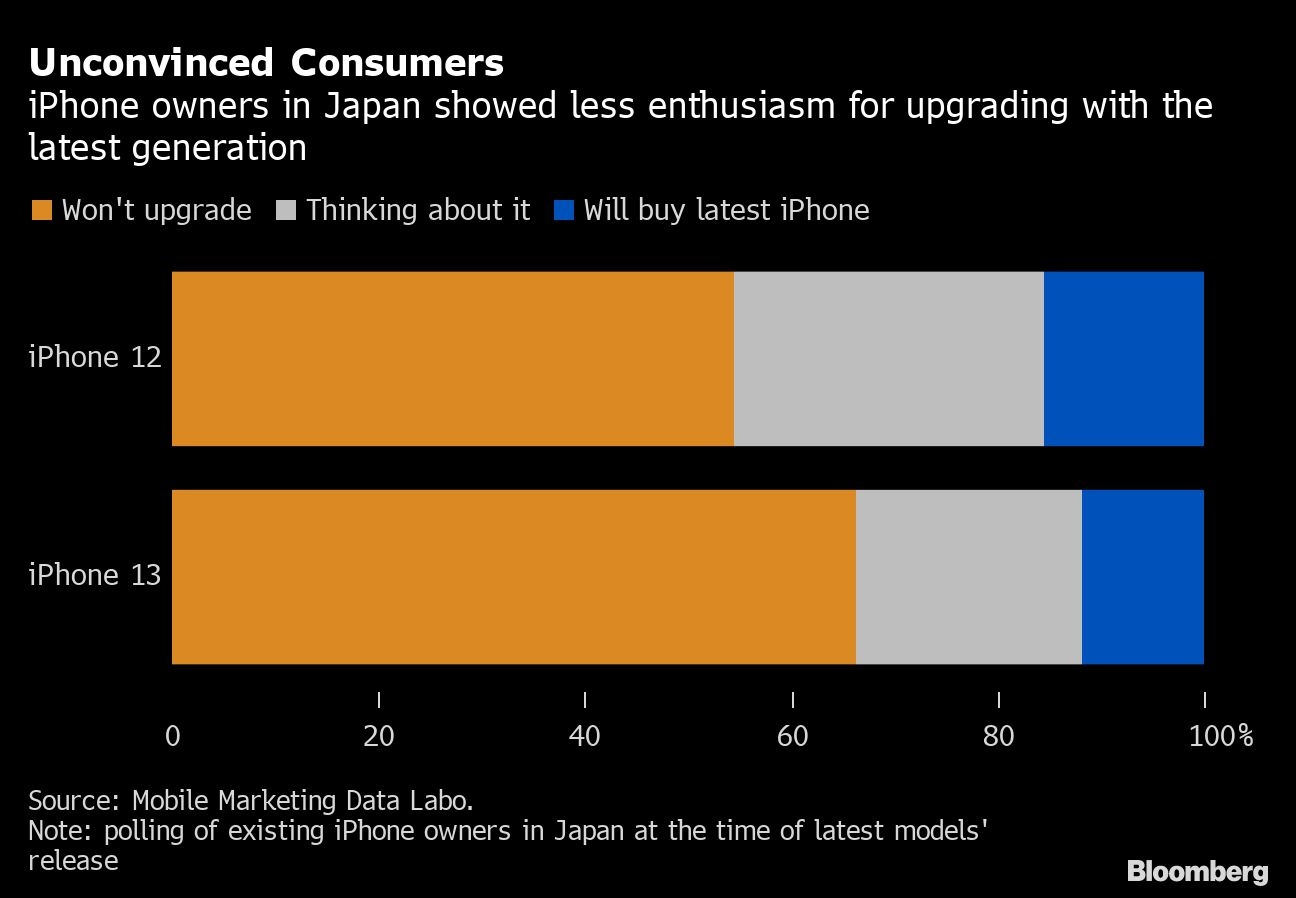 During Apple’s last earnings call in October, Chief Executive Officer Tim Cook said that demand for new products was “very robust” -- fueled by interest in the latest iPhones, iPads and other devices -- and that the company was on track for a record holiday quarter. It had sales of US$111.4 billion in the year-earlier period.

He pointed to supply constraints as the company’s biggest challenge. Cook predicted that the struggle to get enough components, particularly chips, would cost Apple more than US$6 billion in revenue during the holiday quarter.

The constraints have hurt Apple partners as well. Sales for the company’s main chip supplier, Taiwan Semiconductor Manufacturing Co., weakened recently, with October revenue falling 12 per cent from the previous month to NT$134.5 billion (US$4.8 billion).

Last month, Apple’s main iPhone assembler, Hon Hai Precision Industry Co., predicted that its business will shrink this quarter from a year earlier -- caused by declines in consumer electronics and computing -- as it continues to suffer from the chip shortage. On Oct. 24, IQE Plc saw its shares fall 24 per cent after it warned of softening smartphone demand, although the semiconductor company didn’t name any particular customer.

Meanwhile, the iPhone 13 isn’t as hard to get as it once was. Apple shoppers in the U.S. had been waiting about a month for the much-prized Pro model to be delivered. Now wait times are down to two weeks or less.