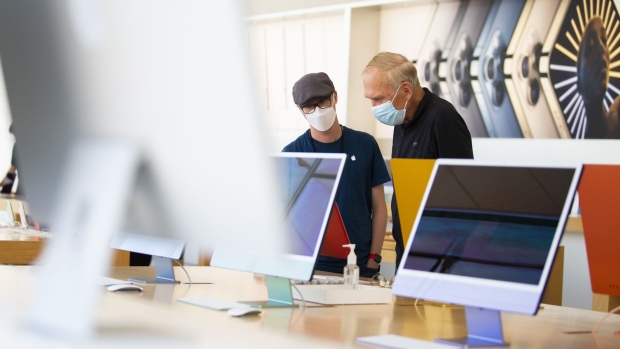 A customer wearing protective masks tries out the new Apple Inc. iMac computers at an Apple store in Palo Alto, California, U.S., on Friday, May 21, 2021. Apple Inc. rolled out the first redesign of its flagship desktop iMac computer in almost a decade, showcasing its latest machine with in-house designed chips instead of those made by Intel Corp. , Bloomberg

The push, which begins next month, will apply to U.S. offices and stores, the company told employees at a meeting Friday. Apple said it’s assessing its policies on a country-by-country basis, but Chief Executive Officer Tim Cook urged workers to get the vaccine.

The iPhone maker has gradually tightened Covid policies, while still stopping short of requiring all employees to get the shots. It previously asked U.S. workers to report their vaccination status. And the company ramped up its optional Covid-19 testing program last month, requesting that employees use it up to three times per week.

Apple also has been struggling with when to ask office workers to come back in-person. It initially aimed to have workers back in June, and then pushed that back until early September. It delayed it again until October and then until January. It has told employees it will give them a one-month warning on a return deadline.

The Verge previously reported on the testing plan.