Apple Inc. is working on a new iPad Pro with wireless charging and the first iPad mini redesign in six years, seeking to continue momentum for a category that saw rejuvenated sales during the pandemic.

The Cupertino, California-based company is planning to release the new iPad Pro in 2022 and the iPad mini later this year, according to people with knowledge of the matter. The main design change in testing for the iPad Pro is a switch to a glass back from the current aluminum enclosure. The updated iPad mini is planned to have narrower screen borders while the removal of its home button has also been tested.

The iPad became an increasingly key part of Apple’s portfolio over the past year as people looked for new ways to work, study and stay entertained at home during Covid-19 lockdowns. Sales of iPads jumped 43 per cent during the last six months of 2020 compared with a year earlier. The gains continued in the first three months of 2021 when the tablets generated US$7.8 billion -- a 79 per cent increase from the same quarter a year earlier.

iPad assembler Hon Hai Precision Industry Co. erased losses after Bloomberg’s report Friday, closing 0.9 per cent up in Taipei. Rival BYD Electronic International Co. climbed as much as 6.2 per cent in Hong Kong. Apple shares rose as much as 2 per cent Friday in New York.

A customer looks at an Apple Inc. iPad Pro equipped with the M1 chip and the Magic Keyboard inside the company's store in Sydney, Australia, on Friday, May 21, 2021. Apple is preparing to release several new Mac laptops and desktops with faster processors, new designs and improved connectivity to external devices, accelerating the company's effort to replace Intel Corp. chips and leapfrog rival PC makers.

For the new Pro model, the switch to a glass back is being tested, in part, to enable wireless charging for the first time. Making the change in material would bring iPads closer to iPhones, which Apple has transitioned from aluminum to glass backs in recent years.

Apple’s development work on the new iPad Pro is still early, and the company’s plans could change or be canceled before next year’s launch, said the people, who asked not to be identified discussing internal matters. An Apple spokeswoman declined to comment. 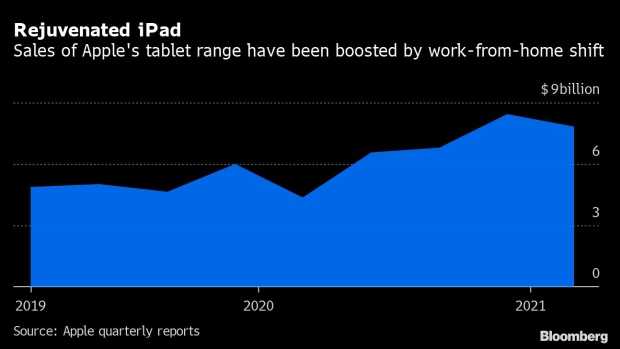 Wireless charging replaces the usual power cable with an inductive mat, which makes it easier for users to top up their device’s battery. It has grown into a common feature in smartphones but is a rarity among tablets. Apple added wireless charging to iPhones in 2017 and last year updated it with a magnet-based MagSafe system that ensured more consistent charging speeds.

The company is testing a similar MagSafe system for the iPad Pro. Wireless charging will likely be slower than directly plugging in a charger to the iPad’s Thunderbolt port, which will remain as part of the next models.

As part of its development of the next iPad Pro, Apple is also trying out technology called reverse wireless charging. That would allow users to charge their iPhone or other gadgets by laying them on the back of the tablet. Apple had previously been working on making this possible for the iPhone to charge AirPods and Apple Watches.

In addition to the next-generation iPad Pro and iPad mini, Apple is also working on a thinner version of its entry-level iPad geared toward students. That product is planned to be released as early as the end of this year, about the same time as the new iPad mini.

The Cupertino company is still exploring a future wireless charger that works similarly to its failed AirPower, a charging mat designed to simultaneously power up an iPhone, Apple Watch and AirPods, the people said. It is also internally investigating alternative wireless charging methods that can work over greater distances than an inductive connection. Turning such technology into a product is likely several years away, however.

Apple last redesigned the iPad Pro in 2018 and its past two updates have focused on performance and camera technologies. The iPad mini was last updated in 2019 with support for the Apple Pencil and a faster chip. The entry-level iPad was refreshed with a faster processor last September.