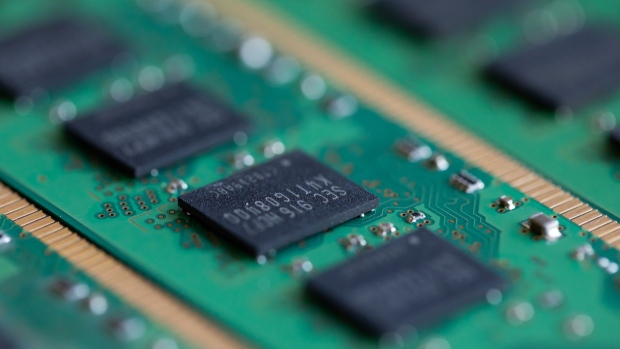 Memory modules are arranged for a photograph. , Bloomberg

Applied Materials Inc. gave a bullish forecast for the current period on increasing orders for equipment used by makers of computer chips.

The Santa Clara, California-based company is the largest maker of machinery used to manufacture chips, the most important parts of the electronics supply chain. Its customers include Samsung Electronics Co., Taiwan Semiconductor Manufacturing Co. and Intel Corp. Chip equipment takes months to make and even longer to install and test in production lines that cost billions of dollars, which makes Applied Materials’ results and forecasts important early indicators of future demand in the electronics industry.

The company is projecting spending on chip-making equipment will rise this year and that growth will continue next year.

“Semiconductor equipment demand is strengthening,” Chief Executive Officer Gary Dickerson said on a conference call with analysts. “Based on what we’re hearing from our customers we believe growth will be sustained in 2021.”
Applied Materials is operating at pre-Covid levels of productivity, he said.

Shares gained about 3.3 per cent  in extended trading. The stock closed at US$65.07 in New York, leaving it up 6.6 per cent this year.