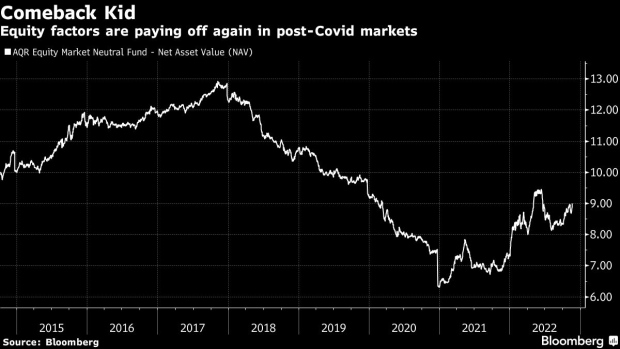 Cliff Asness, co-founder and chief investment officer of AQR Capital Management LLC, speaks during the Bloomberg Invest Summit in New York, U.S., on Wednesday, June 7, 2017. This invitation-only event brings together the most influential and innovative figures in investing for an in-depth exploration of the challenges and opportunities posed by the constantly changing financial, economic and regulatory landscape. , Bloomberg

(Bloomberg) -- Cliff Asness really can’t help himself. Even in his best year on record, the pugnacious billionaire has refused to take it easy, hitting out at meme-stock zealots, lambasting private-market fans and taking Cathie Wood to task -- to name just a few of his attacks in recent months.

The one thing the legendary quant investor hasn’t lashed out at this year? His punching dummy.

Decked out in the apparel of his most-hated sports teams -- the Boston Red Sox and the New Jersey Devils -- the humanoid punching bag looms large in his Greenwich, Connecticut office.

A gift given in the bad old days for his systematic strategies, it was meant to help the AQR Capital Management co-founder let off steam.

These days, he has little use for it as the rules-based trades that he helped popularize on Wall Street roar back to life. That’s even as stock and bonds notch crushing losses in the great 2022 bear market. From value investing to trend following, AQR’s favored investing styles are on a winning streak at long last after taking a heavy beating in the tech-led bull market era.

AQR’s Absolute Return strategy, a mix of its quant trades, is up 38% through Nov. 11, according to a person familiar with the matter who asked not to be identified discussing returns. The strategy is on course for the best year since it was launched in 1998. The firm’s equity fund is up 23%, ranking in the top 5% among similar products, Bloomberg data show.

In an interview, Asness, 56, sheds light on a colorful year, featuring historic returns and online bust-ups, including an infamous Twitter run-in with the Reddit crowd.

“I leaned in too much, partly out of ignorance of how crazy that part of the world is,” Asness says of the spat that saw him describe a group of AMC Entertainment Holdings Inc. fans as a “paranoid investing death cult.”

It was all sparked by a brief mention on CNBC back in June of a minuscule short position that AQR held in the meme-stock favorite. That made him the target of the day-trading army’s vitriol.

But unlike most hedge-fund bosses, Asness hit back. He lacerated his critics -- including some accounts with a small number of followers -- with razor-sharp replies, hammering the point that quants like him don’t even care about any particular stock.

That started around the middle of the year, about the time he was also deriding ARK Investment Management’s Wood for making a “crazy and irresponsible” forecast for astronomical GDP growth. And he shows no signs of easing off -- this month alone he’s poked fun at a notable AllianceBernstein strategist and laid into Donald Trump, among other beefs.

Asness has faced plenty of criticism himself, especially during the years of underperformance that prompted some skeptics to suggest his methods were out of date.

Since AQR helped turn stock factors mainstream in the late 1990s, the firm has largely stayed away from adding newfangled trading signals or even joining the exchange-traded fund boom. The philosophy remains broadly the same: stocks that are cheap (value), steadily profitable (quality) and trending upward (momentum) are likely to prevail over the long haul.

After struggling during the bull market era that was driven by megacap growth stocks, aggressive Federal Reserve rate hikes and endless inflation are now causing profound changes in global finance that are proving kind to quants like Asness.

With richly priced companies falling, picking equities with factors like value has paid off again. At the same time, the one-way inflation trades across assets have helped AQR’s trend-following strategies reap hefty profits.

But Asness isn’t taking a victory lap just yet. Even with a 44% surge from its end-2020 trough, the AQR Equity Market Neutral Fund has yet to return to its 2018 peak. The money manager’s total assets have roughly halved since late 2018 to about $100 billion now.

“I’ll feel real vindication a year or two from now when even from the peak things are very good, which I think will happen,” Asness says.

He has plenty to say about other supposedly successful corners of the investing world -- not least the ever-popular market for private assets. Asness has been fighting a one-man battle to promote the #volatilitylaundering hashtag on Twitter against the allocation preference.

His reasoning: The ostensibly robust performance of the industry is in large thanks to the fact that valuations of private investments aren’t marked to market as often, by design. And that’s a big reason they’ve become so popular.

“I think there’s a very strong argument that a lot of private equity now is bought at least as much for the smoothing properties as the returns, which makes it a very different asset class than it used to be,” says Asness.

Meanwhile the quant investor says the factor-investing comeback may only be getting started. Even after this year’s outperformance, value shares, for example, remain cheap -- suggesting an extended recovery that could last another two-and-a-half years.

“To my meme-stock friends, there’s an acronym they use: HODL, Hold On For Dear Life. It’s a great and important idea, but they use it wrong,” Asness says. “There are a lot of investment strategies you should hold onto for dear life -- if they’re good long-term strategies.”

Asness’s temperament is as fiery as ever. But the dummy in his office is safe for now. These days, it’s proving more useful as a memento of tougher times -- and a reminder that human emotion can overwhelm investor behavior day in, day out.

“We exist to -- mostly, not entirely -- to trade against behavioral biases, human emotions. Yet that doesn’t make any of us immune to it ourselves,” Asness says. “Nobody would think you would need a punching dummy if you were completely immune.”