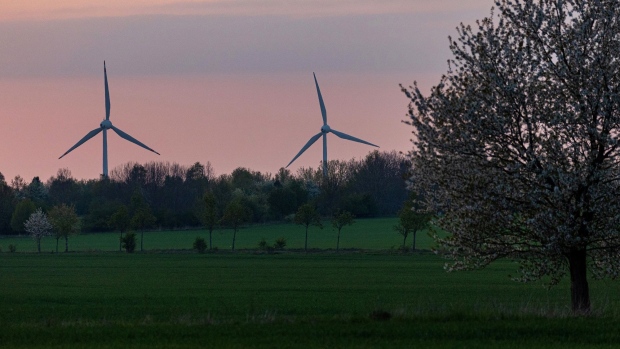 Wind turbines beyond agricultural land in Brandenburg, Germany, on Monday, May 2, 2022. European leaders have promised to scale up the continent's renewable-power capacity while reducing imports of Russian gas, but builders say fast-tracking the energy transition means unraveling red tape and reconciling lofty, national climate ambitions with the limited capacity of most local authorities to implement them. , Bloomberg

(Bloomberg) -- An investment fund launched last year by AQR Capital Management LLC outperformed the vast majority of its peers thanks to a long-short ESG strategy that shuns fossil fuels.

The AQR Sustainable Long-Short Equity-Carbon Aware Fund is up about 20% this year, which is a better result than 94% of comparable funds, according to data compiled by Bloomberg. The MSCI World Index plunged 17% in the same period.

A key focus of the fund, which is co-managed by AQR co-founder Cliff Asness and Lukasz Pomorski, the firm’s head of ESG research, has been to look for undervalued stocks that score well on environmental, social and governance metrics, while shorting companies that don’t seem prepared for the ramifications of global warming.

The fund is “very keenly aware of climate and fossil-fuel exposure,” Pomorski said in an interview. “We don’t allow any long exposure in fossil fuels, oil majors and such.” Within that framework, “the single most important driver has been valuation,” which “paid off in spades in the first quarter and continued into April,” he said.

The fund’s gains suggest ESG investors can still generate solid returns by shunning oil, gas and coal despite this year’s stunning rebound in fossil fuels. That’s amid warnings from some in the industry, including JPMorgan Chase & Co., that clients are starting to worry about missing out on the outsized returns they’re seeing in non-ESG assets.

The AQR fund’s biggest long bets at the end of March included Microsoft Corp., Apple Inc. and Walmart Inc., while some of its biggest short bets targeted Nidec Corp., Toyota Motor Corp. and AstraZeneca Plc, according to the firm’s website. Of the roughly 2,000 stocks in the fund, just under half were shorted in the period.

AQR has gained a reputation as one of the main fund managers promoting short-selling as an effective ESG strategy. That’s as others in the industry have publicly criticized regulators for failing to acknowledge the power of shorting as a way to deliver environmental, social or governance results.

Asness defended the merits of shorting as a powerful way to target the “bad guys,” in an opinion published on the fund manager’s website. In a Feb. 23 article titled “Shorting Counts,” Asness said the strategy has the potential to raise the cost of capital for companies that pollute.

That point of view was recently challenged by MSCI Inc. Rumi Mahmood, vice president of ESG and climate fund research at MSCI, said last month there’s not much evidence to prove that shorting has a meaningful impact on the cost of capital. He also urged fund managers to “back things up in an evidence-based manner” when making ESG claims, amid “enhanced scrutiny” from regulators.

According to Pomorski, ESG investors who don’t take advantage of both long and short strategies are ultimately missing out.

“It’s an unfortunate truth that if you want to build a diversified, long-only allocation to equities or credit for example, you can’t do a lot to lower your exposure to ESG-type risks,” he said. “Some risks are just too systemic to completely eliminate if you’re long-only.”

(Updates to show Asness co-manages the ESG fund, adds details around its status)