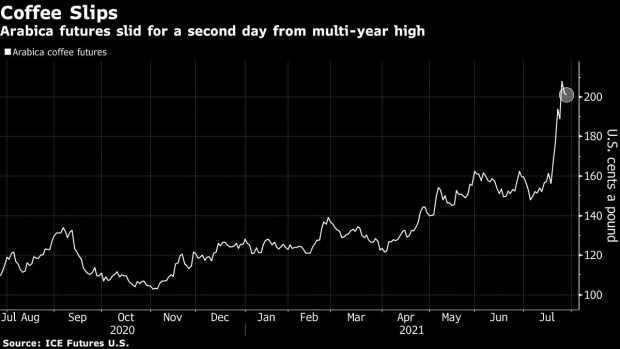 (Bloomberg) -- Arabica coffee prices declined amid speculation that a looming cold snap in Brazil might be less damaging to crops than originally expected.

Futures for the high-quality beans slid for a second day, following a rally that sent them to a seven-year high earlier in the week. Lower temperatures are expected in Brazil, the world’s top Arabica producer, from Thursday.

“This cold front is actually quite strong, but let’s remember there is always a component of luck,” Rabobank senior analyst Carlos Mera said. “For now weather forecasts are for temperatures that will get quite low, freezing in some parts, but not as bad as the actual temperatures” seen earlier in the month.

Brazil is facing a bout of extreme cold affecting crops following a severe drought late last year. Its state of Minas Gerais is the top global supplier of Arabica and Sao Paulo is the world’s biggest growing region for cane and oranges. A Bloomberg gauge tracking coffee beans, raw sugar and cotton slipped on Tuesday after surging to the highest level since 2012 on Monday.

Cloud cover this week could help steer Brazil’s expected cold front toward the ocean, meaning that the weather could be less damaging to coffee than the frost that hit on July 20, according to Michael McDougall, managing director at Paragon Global Markets.

In other commodities, raw sugar for October delivery rose and cocoa declined.