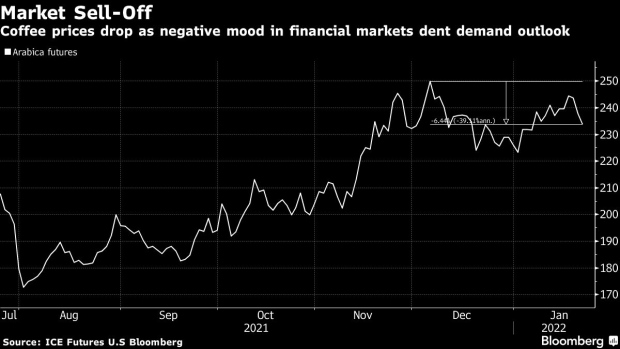 The most-active arabica contract slumped as much as 2% to $2.33 a pound, hitting a two-week low after dropping 2.4% on Friday. While an improved supply outlook has helped put brakes on the rally in coffee prices, the negative shift in global risk sentiment “may dampen near-term demand prospects,” Chicago-based Hightower Report said in a note.

Rising geopolitical tensions between Ukraine and Russia “have led to a flight to safe havens such as the US dollar, which inevitably is bearish commodities,” said Kona Haque, head of research at ED&F in an emailed statement.

Equities and commodities declined as investors weighed Russia-linked geopolitical tensions and braced for the Federal Reserve’s meeting this week amid expectations of an aggressive tightening cycle.

Also weighing on prices are higher exports with Ethiopia reporting a 90% jump in shipments during the six months through January. Meanwhile, money managers cut their net-bullish bets to a 7-week low.

Cocoa futures were also down more than 1.7% as the world grapples with a surplus built up in the last two years as the pandemic slowed demand for the key ingredient in chocolate. In other soft commodities, raw sugar futures were down while cotton was up.