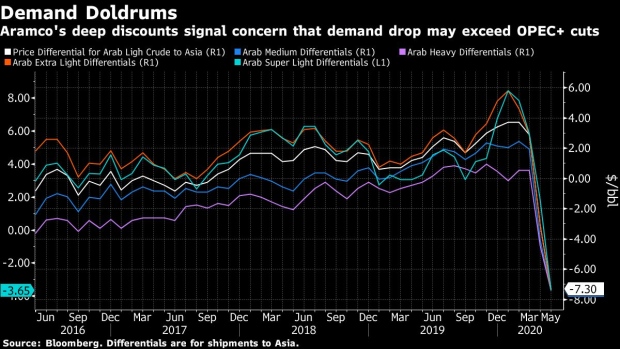 An oil drilling rig stands on one of the Causeway islands in the Manifa offshore oilfield, operated by Saudi Aramco, in Manifa, Saudi Arabia. , Anthony Di Paola

(Bloomberg) -- Saudi Arabia cut most of its crude pricing as the coronavirus hammers oil demand -- a clear sign that the kingdom seeks to keep its barrels competitive after producers agreed to coordinate global cuts in output.

State-run Saudi Aramco reduced official selling prices for May exports to Asia and the Mediterranean region, according to a price list seen by Bloomberg. The world’s biggest exporter raised pricing to the U.S. and trimmed discounts for some barrels to northwest Europe.

Lockdowns and stay-at-home orders are choking demand for fuel amid efforts to stop the pandemic. Led by Saudi Arabia, OPEC+ producers agreed Sunday night to slash oil output by nearly a 10th to help remove excess supply. Yet, even this historic global intervention will only partly offset the estimated loss in crude demand.

By decreasing its official selling prices to Asia for a second consecutive month, Aramco is discounting its oil to some of the lowest levels in at least two decades. Asia is Aramco’s biggest market, indicating that the producer is seeking to defend its share of sales in the region even as it trims output.

“The global market remains very oversupplied,” said Ole Hansen, head of commodity strategy at Saxo Bank. “Aramco is still prepared to fight for its market share. While the U.S. hike is symbolic, the real challenge, in terms of maintaining market share, can be seen through the lower OSP to Asia.”

With barrels getting more expensive for buyers in the U.S. and northwestern Europe, Russia’s backyard when it comes to crude sales, Aramco may look to sell less oil there after Presidents Donald Trump and Vladimir Putin helped broker the deal aimed at saving their oil industries. Pricier Saudi crude in the U.S. is “designed to keep Trump happy,” Hansen said.

Saudi Arabia, which has been pumping at a record pace this month, took steps to end the oil-price war it unleashed in March by bringing producers and consumers together to make unprecedented supply cuts. The Organization of Petroleum Exporting Countries and partners such as Russia agreed in principle last week to slash production, and they finally settled Sunday on a collective reduction of 9.7 million barrels a day.

The U.S., Canada and other Group of 20 nations will make additional reductions. Crude prices are too low for some producers to keep pumping.

The Saudi state producer cut its official selling price for flagship Arab Light crude to buyers in Asia by $4.20 a barrel, to a discount of $7.30 versus the Middle East benchmark. That’s deeper than eight traders and refiners in a Bloomberg survey in late March said they expected, predicting a median reduction of about $3.60.

The actual reductions in differentials for Asia ranged from $2.95 a barrel to as much as $5.50, depending on the type of crude, following deep cuts for April sales.

U.S. buyers, however, will see May crude differentials increase by between $2.50 a barrel for Arab Extra Light crude and $4.20 for the Heavy grade, according to the price list. Aramco is also raising pricing on its Medium and Heavy crudes to Asia by $2 each for buyers in northwestern Europe, where those barrels compete with Russia Urals crude.

Aramco delayed the pricing announcement four times as it waited for the producer meetings to convene and as deliberations dragged on over the Easter weekend.