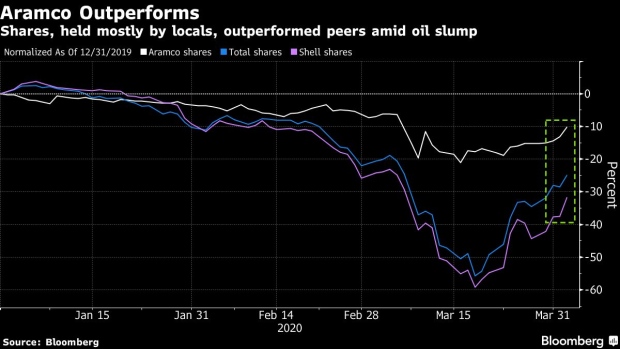 (Bloomberg) -- Saudi Aramco shares have shaken off the ravages of an oil-price war to regain the company’s $1.7 trillion valuation achieved in its record-breaking initial public offering.

The stock rose as much as 2.8% to 32.55 Saudi riyals on Sunday in Riyadh, trading above the 32 riyals IPO level it surrendered a month ago. The slump reflects a dispute over production levels between Saudi Arabia and Russia.

Aramco shares retreated as much as 27% from a peak in December to the low plumbed last month, also dragged down by a decline in global crude oil demand as governments locked down economies to fight the coronavirus.

Saudi Aramco is at the center a price fight between the kingdom and Russia. The Saudi oil giant delayed the release of its key monthly oil pricing list that was due on Sunday until later this week. That will allow it to wait for an indication on what may happen at an OPEC+ meeting planned for Thursday to discuss crude production levels.

Even though Brent has slumped almost 50% this year, Aramco said March 16 it still intends to distribute at least $75 billion to shareholders in 2020. It has outperformed oil majors such as Total SA and BP Plc, which are part of a wider group also retaining hefty payouts.