But accounts published before the firm’s debut in the international bond market also show Aramco -- an organization that produces about 10 per cent of the world’s crude -- doesn’t generate as much cash per barrel as other leading oil companies like Royal Dutch Shell Plc because of a heavy tax burden.

The bond sale, being pitched to investors this week in a global roadshow, has forced Aramco to reveal secrets held close since the company’s nationalization in the late 1970s, casting a light on the relationship between the kingdom and its most important asset. Both Fitch Ratings and Moody’s Investors Service assigned Aramco the fifth-highest investment grade, the same as Saudi sovereign debt, but lower than oil majors Exxon, Shell and Chevron Corp.

The company is preparing to raise debt in part to pay for the acquisition of a majority stake in domestic petrochemical group Sabic, worth about US$69 billion. The deal is a Plan B to generate money for Saudi Arabia’s economic agenda after an IPO of Aramco was postponed. In effect, Crown Prince Mohammed bin Salman is using the firm’s pristine balance sheet to finance his ambitions.

Aramco will pay 50 per cent of the Sabic acquisition cost when the deal closes and the rest over the subsequent two years, according to a person who saw a presentation made to potential investors on Monday. Aramco declined to comment. 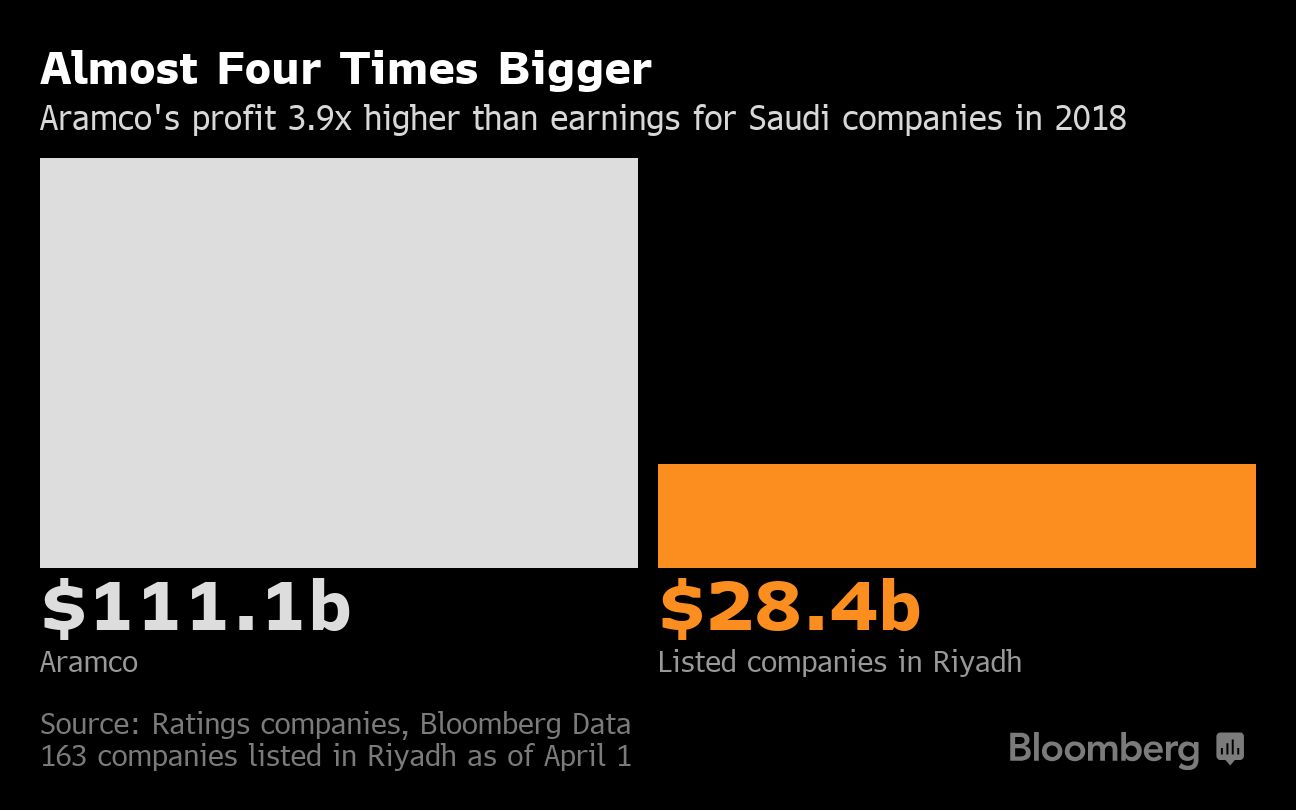 The kingdom’s dependence on the company to finance social and military spending, as well as the lavish lifestyles of hundreds of princes, places a heavy burden on Aramco’s cash flow. Aramco pays 50 percent of its profit on income tax, plus a sliding royalty scale that starts at 20 percent of the company’s revenue.

Aramco reported cash flow from operations of US$121 billion and US$35.1 billion in capital spending, and paid US$58.2 billion in dividends to the Saudi government in 2018, according to Moody’s. In a presentation to potential bondholders, the company said its "ordinary dividend" last year was of US$52 billion. There wasn’t an immediate explanation about the gap between the two figures.

Fitch said its A+ rating reflects the “strong links” between the company and the kingdom, and the influence the state has on Aramco through regulating the level of production, taxation and dividends.

“Over time, a low oil price environment could cause a sustained fiscal deficit for Saudi Arabia that could result in changes down the line for Aramco’s fiscal regime,” said Neil Beveridge, an energy analyst with Sanford C. Bernstein & Co. in Hong Kong. “You can’t disassociate the sovereign government from Aramco given the very close relationship and the contribution Aramco makes to the overall funding for Saudi Arabia.”

“Funds from operations, which is operation cash flows before working capital changes, is the best measure to compare oil companies’ profitability, since Ebitda does not take into account taxation,” Dmitry Marinchenko, senior director at Fitch in London, said in an interview.

Fitch’s A+ rating for Aramco is one level below the AA- for both Shell and Total. The Moody’s rating is well behind Exxon’s top Aaa level.

The oil giant has mandated banks to hold a roadshow for dollar-denominated notes from April 1, potentially including tranches from three to 30 years, according to a person familiar with the matter. Fitch said that Aramco planned to pay for the 70 percent stake in Sabic “in installments over 2019-21.”

The bond plan, credit rating and the publication of the first extracts of Aramco’s accounts are all part of the ambitions of Prince Mohammed, who controls most of the levers of power in the kingdom and wants to pursue an IPO as part of his plans to ready the country for the post-oil age. Yet his ambition to secure a $2 trillion valuation has faced push back from global investors, prompting a delay in the IPO.

If he achieves the target, the offering will raise a record $100 billion by selling a 5 percent stake, dwarfing the record $25 billion raised by Chinese internet retailer Alibaba Group Holding Ltd. in 2014.

“Saudi Aramco has many characteristics of a Aaa-rated corporate, with minimal debt relative to cash flows, large scale of production, market leadership and access in Saudi Arabia to one of the world’s largest hydrocarbon reserves,” said Rehan Akbar of Moody’s. “The final rating is however constrained by the government of Saudi Arabia’s A1 rating because of the close interlinkages between the sovereign and the company.”