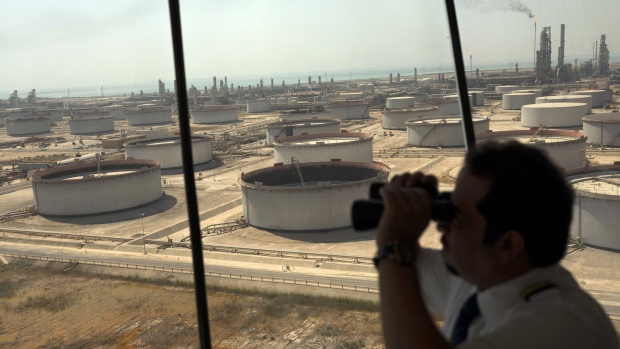 An employee uses binoculars to look out towards the Arabian Sea in the Port Control Center at Saudi Aramco's Ras Tanura oil refinery and terminal in Ras Tanura, Saudi Arabia, on Monday, Oct. 1, 2018. Saudi Aramco aims to become a global refiner and chemical maker, seeking to profit from parts of the oil industry where demand is growing the fastest while also underpinning the kingdoms economic diversification. Photographer: Bloomberg/Bloomberg , Photographer: Bloomberg/Bloomberg

Saudi Aramco and Saudi Basic Industries Corp. will re-evaluate the scope of a planned crude-to-chemicals project in the kingdom as they seek to reduce spending amid a slump in prices for their products.

The two companies have decided to reassess the Yanbu project on the Red Sea coast -- which was expected to cost as much as $20 billion -- to incorporate existing facilities instead of building an entirely new one, Sabic said in a statement Sunday.

Aramco and Sabic were looking to shelve the project, or incorporate it with existing refineries, as part of plans to cut back on their spending, people familiar with the matter told Bloomberg in September.

Converting crude directly into chemicals, without having to refine the crude first, is part of Aramco’s plan to diversify away from selling oil and earn more profit from each barrel it pumps. Aramco, the world’s biggest oil company, aims to roughly double refining capacity to boost its unprofitable downstream unit. It also bought a 70% stake in chemical maker Sabic from Saudi Arabia’s sovereign wealth fund for $69 billion this year.

Both companies are making deep cuts in their planned capital expenditure. Lower oil prices led Aramco to report a 73% drop in second-quarter profit and a sharp increase in debt as it seeks to maintain a $75 billion dividend. Sabic suspended new capital spending earlier this year as it reported losses in the first and second quarters.