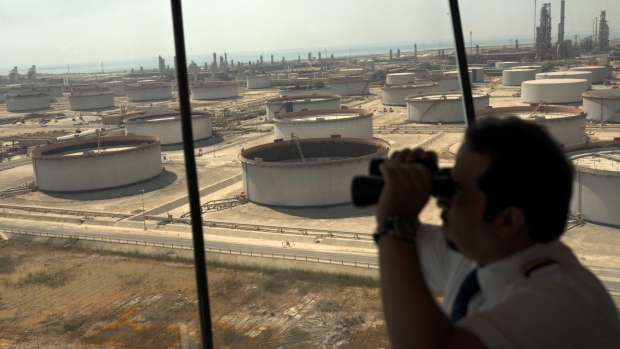 An employee uses binoculars to look out towards the Arabian Sea in the Port Control Center at Saudi Aramco's Ras Tanura oil refinery and terminal in Ras Tanura, Saudi Arabia, Oct. 1, 2018. Bloomberg

Advisers working on Saudi Aramco’s mammoth share sale may split a fee pool of as much as US$450 million, according to people with knowledge of the matter, making it one of the biggest IPO pay outs globally.

The oil giant is set to pay between US$350 million and US$450 million to a group of more than 20 banks working on its initial public offering, the people said, asking not to be identified because the information is private. The payment would represent a fee of about one per cent on the US$40 billion Aramco is seeking to raise — relatively low in comparison to other markets.

JPMorgan Chase & Co. and Morgan Stanley are expected to be paid the most, the people said. The final amount paid to banks will depend on how much Aramco raises, they said. A representative for Aramco declined to comment.

Investment bankers from around the world have been pitching for years to win a coveted role on Aramco’s IPO. Many firms have been investing heavily into the kingdom on expectations of a fee bonanza as the country diversifies away from oil. Many have been left disappointed though as deals have been delayed or failed to materialize.

Even though Aramco’s would be one of the biggest fee pools for investment banks, it would still fall short of the US$535 million Softbank Group Corp. paid when it raised US$21 billion by selling shares in its Japanese telecommunications business last year.

Still, perhaps bankers shouldn’t complain too much. When Saudi Arabia’s National Commercial Bank raised US$6 billion in its 2014 IPO, advisers including HSBC and Gulf International Bank were paid just 0.1 per cent of the offering value.

Aramco’s board is planning to meet with its advisers on the IPO around Oct. 17 to give final approval for the share sale, according to other people familiar with the matter. Aramco is speeding up preparations for the IPO with an aim of listing on the Saudi bourse as soon as November, Bloomberg News has reported.

The draw of working on what’s set to be the world’s biggest IPO — even for relatively low compensation — has attracted some of the top Wall Street names. Aramco appointed nine global co-coordinators, including Goldman Sachs Group Inc., HSBC Holdings Plc and Credit Suisse Group AG. There are also 15 book runners and three financial advisers.

Alibaba Group Holding Ltd. paid US$300 million to banks when it raised US$25 billion in the biggest IPO to date.