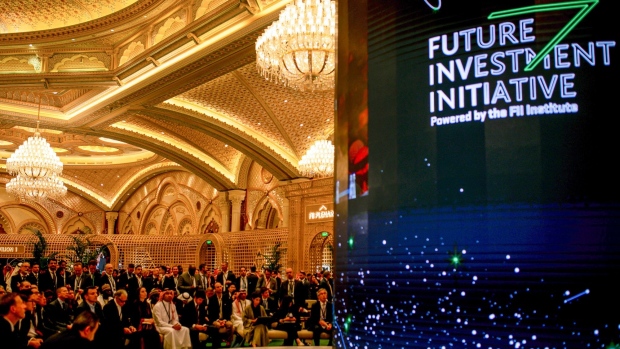 Attendees watch a broadcast in a hall at the Future Investment Initiative (FII) conference in Riyadh, Saudi Arabia, on Tuesday, Oct. 25, 2022. Saudi Arabia hopes the FII will put Riyadh on the map as a global destination for deals, while also improving domestic investment, which has been limited. Photographer: Tasneem Alsultan/Bloomberg , Bloomberg

(Bloomberg) -- The second day of Saudi Arabia’s Future Investment Initiative event saw warnings ring out from heads of some of the world’s largest asset managers, who said central banks might struggle to lower inflation.

Speaking at the summit in Riyadh, Pacific Investment Management Co. Vice Chairman John Studzinski and Franklin Templeton CEO Jenny Johnson described inflation in the US as “sticky.” Third Point CEO Daniel Loeb offered a different view, and said “we may have already seen the worst of it.”

Meanwhile, Saudi Arabia’s Finance Minister said the kingdom has made its economy more resilient by identifying risks from global shocks quickly. And Aramco said the global oil market is already adjusting to sanctions on Russia, with Moscow redirecting crude flows to Asia from Europe and other producers making the opposite switch.

Former US Treasury Secretary Steven Mnuchin said market watchers who were too sanguine about risks to the economy a year ago are now being too alarmist. “All of a sudden everybody has turned incredibly negative,” he told the conference.

Brookfield Asset Management Inc. CEO Bruce Flatt said inflation was too high, caused by money flooded into the system for a short period of time. The Fed needs to get to a point where the economy slows, he said.

“We need to crush that inflation and central banks are going to do that,” he said. On investments, Flatt said real assets and private capital are the place to be in.

Pimco Vice Chairman Studzinski described inflation in the US as “sticky” and doesn’t expect it to reset to 2% in the foreseeable future. He also expects a series of interest rate hikes in the short term.

“We’re looking at somewhere between 3 to 4% as being a core level of inflation certainly for the next couple of years,” he said. “Until you’ve got some resolution of energy, some resolution of supply chains, and some resolution to some sort of some of the geopolitical tensions that exist, particularly in Europe.”

Franklin Templeton CEO Johnson agreed. She said core inflation “is stickier than most people think” given consumers have very little debt, more money in their bank account than prior to Covid, and unemployment is low.

The asset manager also expects the Fed to “pretty aggressively raise rates.” It sees “75, 50 and then maybe another 50 or two 25s. It will then have to sit on it a while because it’s a lag effect.”

Third Point CEO Loeb offered a different view, saying: “I actually think we may have already seen the worst of it” “It doesn’t mean inflation is going away. It means that our peak inflation is starting to roll over. You’re seeing some improvement.”

However, he raised concerns over the lengths the Federal Reserve may have to go to keep what he called a “flattening off in rates.”

“The next thing to be concerned with is what does this mean? How long does it last, and how much will the Fed have to beat the economy into submission in terms of driving up unemployment?” he said. “I think it’s going to be less bad than people think.”

The Public Investment Fund plans to set up companies to invest in Bahrain, Oman, Jordan, Iraq and Sudan, according to a statement. It will channel funds into several sectors including infrastructure, heath care, real estate and telecommunications. In August, the PIF started the Saudi Egyptian Investment Co. to invest in Egypt.

Saudi Arabia’s Crown Prince Mohammed bin Salman is sitting on his first budget surplus since coming to power, allowing him to channel billions of dollars into assets globally and to plan ambitious construction projects.

Saudi Aramco said the global oil market is already adjusting to sanctions on Russia, with Moscow redirecting crude flows to Asia from Europe and other producers making the opposite switch.

“Realignment is happening,” Amin Nasser, chief executive officer of the world’s biggest oil company, said at the Future Investment Initiative event in Riyadh. “Russians, with the right discount, are able to place their crude in different markets.”

“There are logistical issues, insurance issues,” Nasser said. “But that’s being handled with the right discounts. The flow is going to Asia -- though, it takes longer. And crude that used to go to Asia is now being directed to Europe and other parts of the world.”

The Oman Investment Authority, which manages funds equivalent to 40% of the sultanate’s economy, is looking for deals in the UK, a senior executive said.

“Problems create opportunities,” Ibrahim Al Eisri, director of private equity at OIA said in an interview. “We see opportunities in Europe in different sectors especially in technology. UK has lots of opportunities due to the falling currency.”

“We have high exposure to the US and we like that market,” he said.

Saudi Arabia got ahead of the global slowdown and worked to mitigate risks to its economy, Finance Minister Mohammed al-Jadaan said.

“You need to make sure you mitigate early, you are ahead of the curve, as we have done over the past couple of years to make sure you are protected from these shocks,” he told Bloomberg TV in an interview.

He predicted Saudi Arabia’s non-oil GDP would continue to grow at 5% or more next year. Externally, the kingdoom has taken steps to stabilize energy markets and he said US and Saudi Arabia had strong ties despite recent tensions over oil policy.

Saudi Aramco started a $1.5 billion sustainability fund to invest in technology that can support energy transition.

Rising interest rates will make the shift away fossil fuels more expensive and so policymakers need to act to get inflation under control, said HSBC Holdings CEO Noel Quinn at the event.

Still, banks will also need to continue financing fossil fuels for the next few years to ensure societies basic needs are met.

“We can’t just put all our investment into the future, and ignoring today. There needs to be capacity to survive for society to have some of the basic needs met, not just in 2023 but into 2023, 2024 and 2045. There has to be a bridge into the future.”

“People want to switch off todays energy sources and you can’t,” Quinn said.

“There was to a large extent a denial about the risks we’re seeing today, during previous IMF meetings but that changed during last week’s meetings in Washington,” he said.

Speaking about the region, he said “there’s a lot of commitment to reform and that reform is continuing.”

“We need to be watchful and provide whatever support for the region,” he added.

Former US Treasury Secretary Steven Mnuchin said at the event that China is set to endure a significant slowdown.

“Clearly China is going to have a significant slowdown and that will have an impact on the world economy,” said Mnuchin, now managing partner at Liberty Strategic Capital. “Things are going to get worse before they get better.”

Mnuchin said he expects 10-year Treasury yields to peak at 4.5%. Treasuries rallied sharply Tuesday amid signs that Federal Reserve rate hikes are beginning to take a toll on the economy.

Mnuchin said people underestimated economic risks previously but now “we’re overestimating those risks. All of a sudden everybody has turned incredibly negative.”

“I think you are going to see inflation in the US will begin to come under control and it will probably be a two-year period,” he said. “But you’re going to begin to see that tightening relatively regularly. And I think people are overestimating the Federal Reserve’s actions just as they underestimated it.”

Investcorp, the Middle East’s largest alternative asset management firm, and the private equity arm of the Fung brothers’ family office are setting up a fund to invest in mid-cap companies across China’s Greater Bay Area.