Saudi Aramco shares surged after the initial public offering, valuing the oil producer at a record US$1.88 trillion and lifting Saudi Arabia’s stock market into the ranks of the world’s largest.

The stock jumped the daily 10 per cent limit to 35.20 riyals when trading began at 10:30 a.m. in Riyadh as Aramco board members, Saudi officials and invited guests cheered at a ceremony at the Fairmont Hotel in the kingdom’s capital.

Aramco raised US$25.6 billion in the biggest-ever IPO, selling shares at 32 riyals each and valuing the company at US$1.7 trillion, overtaking Microsoft Corp. and Apple Inc. as the most valuable listed company. 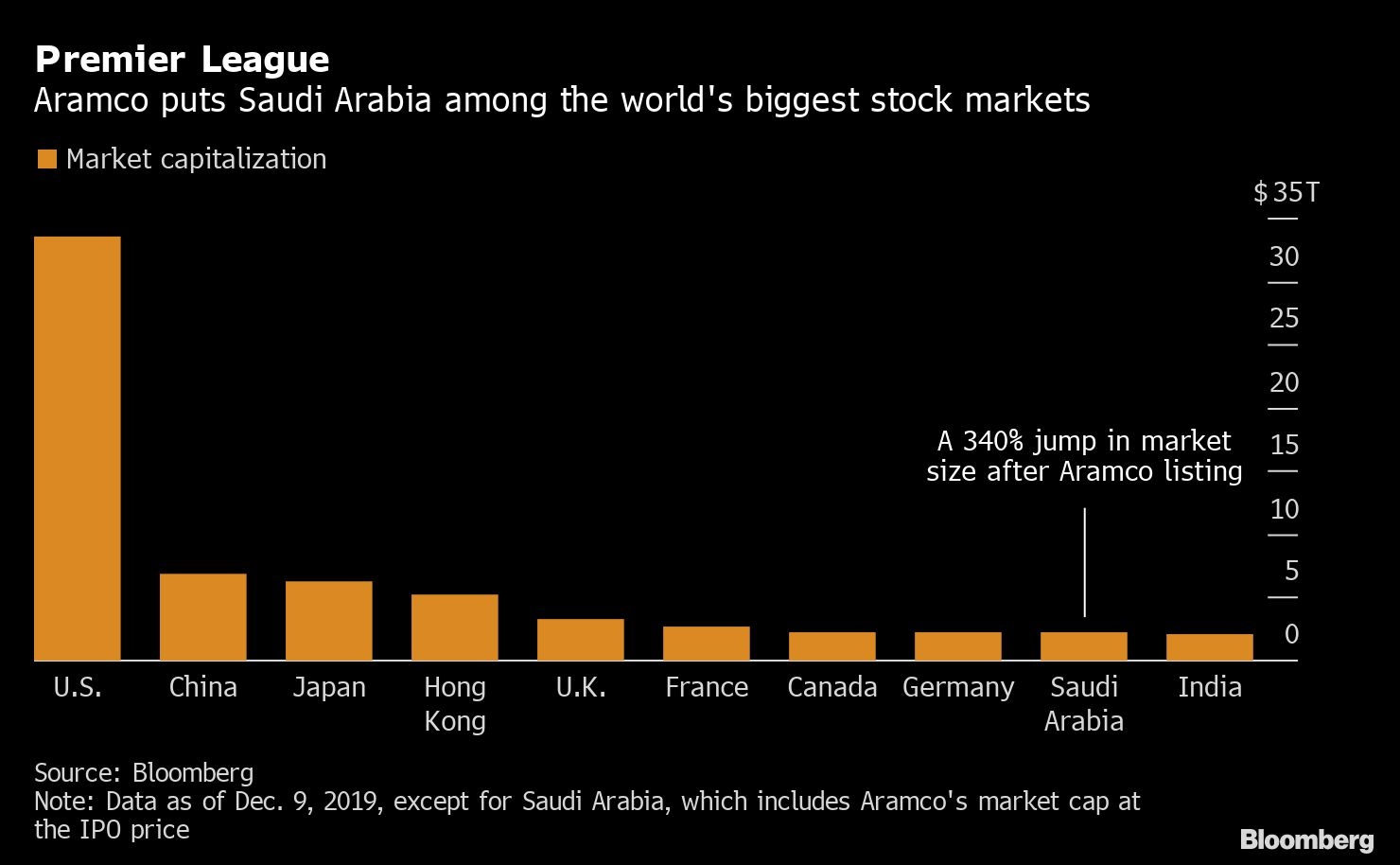 The start of trading in Riyadh marks the end of a near four-year saga that’s been intertwined with Crown Prince Mohammed bin Salman’s rise to global prominence and his Vision 2030 plan to reform the Saudi economy. First announced in an interview with Economist in January 2016, the IPO fell short of the US$100 billion international offering with a valuation of US$2 trillion that the prince once proposed.

Saudi officials pulled out all the stops to ensure that the stock traded higher after an offering that international investors largely rejected, citing the valuation and concerns including governance issues and possible security threats. The stock price also should be underpinned by demand from index-tracking funds, since Aramco will be added to emerging-market benchmarks.

“Aramco should easily get to the US$2 trillion valuation as soon as tomorrow; there is plenty of appetite for it,” said Marie Salem, the head of institutions at Daman Securities in Dubai. “And more money should flow soon with the international index inclusions. The start couldn’t be better.”

Aramco is so big that it easily dwarfs the rest of the companies in the Saudi market, which have a combined value of about US$500 billion. Adding in Aramco, the kingdom’s bourse becomes the world’s ninth-biggest stock market, overtaking India and closing in on Germany and Canada. Saudi Arabia, though, only sold 1.5 per cent of the company’s capital, meaning that barely any of its shares will trade. 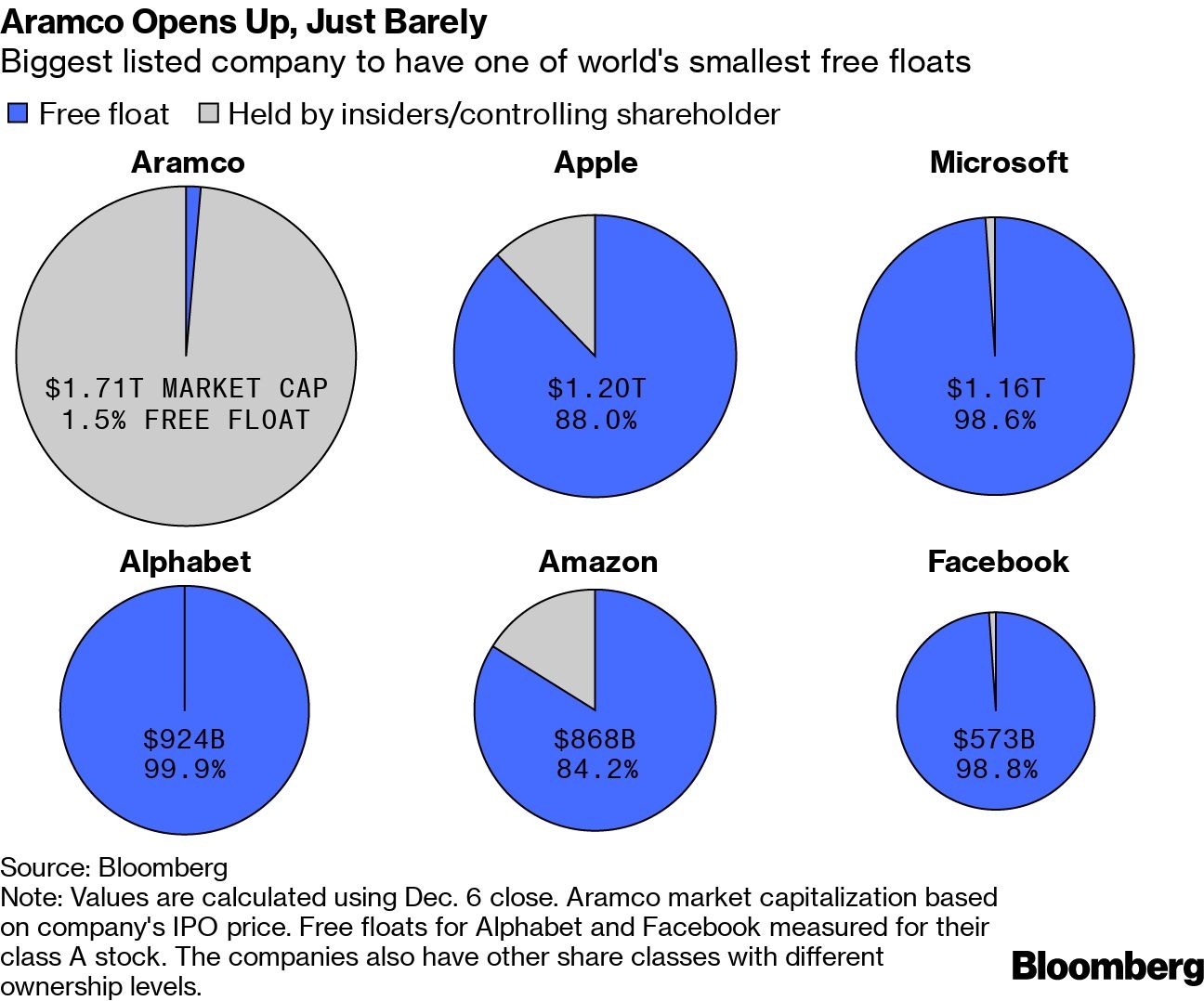 Final orders surpassed US$119 billion, with authorities allowing lenders to boost loans beyond usual to support the sale.

“There are a lot of transparency issues in the disclosures and based on the expected listing valuation, it doesn’t seem one is getting paid for that uncertainty or opacity,” said Adam Choppin, an investment officer at FIS Group in Philadelphia, who decided not to buy shares. “Reportedly, it seems that a good amount of local investors have been cajoled into participating, whereas no such leverage exists over foreign investors.”

Aramco’s IPO was said to have relied on some of the kingdom’s richest families, who had members detained in a hotel during a so-called crackdown on corruption in 2017, and also on cash from neighboring allies such as the sovereign wealth funds of Kuwait and Abu Dhabi. Gulf Cooperation Council investors are confident the stock price has plenty of room to increase, boosted by incentives that go from bonus shares to the fast inclusion in emerging-market benchmarks.

A surge in early trading validates “our thesis that Aramco’s pricing fell short of US$2 trillion to leave upside on the table for Saudi and GCC investors, allowing them to benefit from the listing of Saudi’s crown jewel,” said Zachary Cefaratti, chief executive officer at Dalma Capital Management Ltd., which bought shares in the IPO through three funds.

Goldman Sachs Group Inc., acting as share stabilizing manager, has the right to exercise an option to sell another 450 million shares. It could be executed in whole or in part up to 30 calendar days after trading begins. The previous largest IPO, Alibaba Group Holding Ltd., rose 38 per cent in its trading debut in 2014.

The Aramco IPO proceeds will be transferred to the Public Investment Fund, which has made a number of bold investments, including into SoftBank Group Corp.’s Vision Fund and a $3.5 billion stake in Uber Technologies Inc. Saudi authorities flagged this week that “a lot” of the money will be spent in the domestic economy.

Giant in the Room

The proceeds of the Aramco deal alone are equal to more than a decade of IPOs on Tadawul, the Saudi stock exchange, which has already said that the company’s weighting in the main local benchmark will be capped at 15 per cent. And even though Aramco’s free float is among the lowest globally, the deal opens up one of the world’s most secretive companies, one that bankrolled Saudi Arabia and its rulers for decades, but until this year had never published financial statements or borrowed in international debt markets.

Aramco has promised a bumper dividend payment of a minimum US$75 billion a year until at least 2024. That could make yields competitive with the likes of Exxon Mobil Corp. and Royal Dutch Shell Plc, but also threatens to stretch the world’s largest oil producer if prices fall.