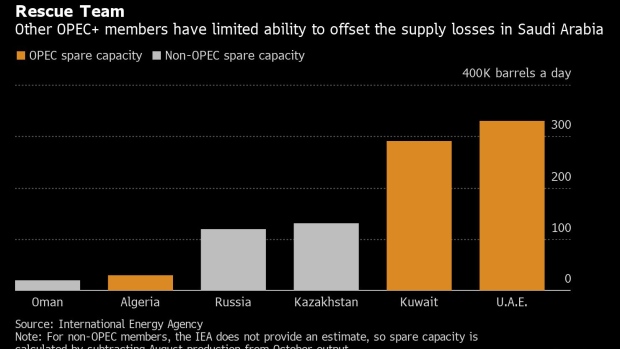 (Bloomberg) -- Saudi Aramco is growing less optimistic that there will be a rapid recovery in oil production from the weekend’s attack and now faces weeks or months before the majority of output is restored at the giant Abqaiq processing plant.

All eyes are on how fast the kingdom can recover from the devastating strike, which knocked out roughly 5% of global supply and triggered a record surge in oil prices. Initially, it was said that significant volumes of crude could begin to flow again within days. While Aramco is still assessing the state of the plant and the scope of repairs, it currently believes less than half of the plant’s capacity can be restored quickly, said people familiar with the matter, asking not to be identified because the information isn’t public.

”Damage to the Abqaiq facility is more severe than previously thought,” said Amrita Sen, chief oil analyst at Energy Aspects Ltd. “While we still believe up to 50% of the 5.7 million barrels a day of output that has been disrupted could return fairly swiftly, full resumption could be weeks or even months away.”

The loss of Abqaiq, which handles 5.7 million barrels of oil a day, or about half of Saudi production, is the single worst sudden disruption to the oil market. Saudi Aramco is firing up idle offshore oil fields -- part of its cushion of spare capacity -- to replace some of the lost production, one person said. Aramco customers are also being supplied using stockpiles, though some buyers are being asked to accept different grades of crude oil. The kingdom has enough domestic inventories to cover about 26 days of exports, according to consultant Rystad Energy A/S.

In an extraordinary trading day, London’s Brent crude leaped almost $12 in the seconds after the open, the most in dollar terms since their launch in 1988. Prices subsequently pulled back some of that initial gain of almost 20%, but rallied again as traders waited in vain for an Aramco statement clarifying the scale of damage. Futures were trading at almost $69 a barrel as of 6:19 p.m. local time, heading for the biggest advance ever. A record volume of Brent contracts changed hands.

Abqaiq’s stabilization towers, which separate gaseous compounds from crude oil, could take the longest to repair, said Phillip Cornell, a former senior corporate planning adviser to Aramco. “They can take weeks or months to get specialized parts,” he said at an event hosted by the Atlantic Council in Washington.

Five out of 18 stabilization towers appear to have been taken out and the pictures that have been released show “very specific, accurate targeting of those particular infrastructures,” Cornell said.

In addition to the immediate loss of supply, the attack raised the specter of U.S. retaliation against Iran, which it blamed for the strike. While Iran-backed Houthi rebels in Yemen claimed responsibility for the assault, which they said was carried out by a swarm of 10 drones, several administration officials Sunday said they had substantial evidence Iran was directly responsible.

President Donald Trump promised on Monday to help allies following attacks on major Saudi Arabian oil facilities, even though he said the U.S. is no longer directly reliant on Middle Eastern oil and gas and has few tankers there.

A Saudi military official said Monday that preliminary findings show that Iranian weapons were used in the attacks but stopped short of directly blaming the Islamic Republic for the strikes.

To see the photos that show how the attack crippled Saudi Arabia’ output, click here.

Responsible for almost a 10th of global crude output, Saudi Arabia has been under siege this year -- targeted by air, sea and land -- as tensions with Iran flare. The Houthi rebels said on Monday that oil installations in the kingdom will remain among their targets. The Iranian-backed rebel group, cited by the Houthi’s television station, said its weapons can reach anywhere in the country.

“No matter whether it takes Saudi Arabia five days or a lot longer to get oil back into production, there is but one rational takeaway from this weekend’s drone attacks on the Kingdom’s infrastructure -- that infrastructure is highly vulnerable to attack, and the market has been persistently mispricing oil,” Citigroup Inc.’s Ed Morse wrote in a research note.

Trump authorized the release of oil from the U.S. Strategic Petroleum Reserve, while the International Energy Agency, which helps coordinate industrialized countries’ emergency fuel stockpiles, said it was monitoring the situation.

The Organization of Petroleum Exporting Countries is in regular contact with the Saudi authorities, who have risen to the challenge by keeping oil flowing, the group’s Secretary-General Mohammad Barkindo said in a Bloomberg TV interview. It’s premature to talk about reversing the oil-production cuts implemented by OPEC and its allies, he said.

Even if OPEC+ did decide to roll back their cuts, they would only be able to add about 900,000 barrels a day to the market, just a fraction of the Saudi losses, according to Bloomberg calculations based on IEA data.

(Updates with comments from Atlantic Council event in sixth paragraph)

--With assistance from Christopher Sell and Evan Sully.