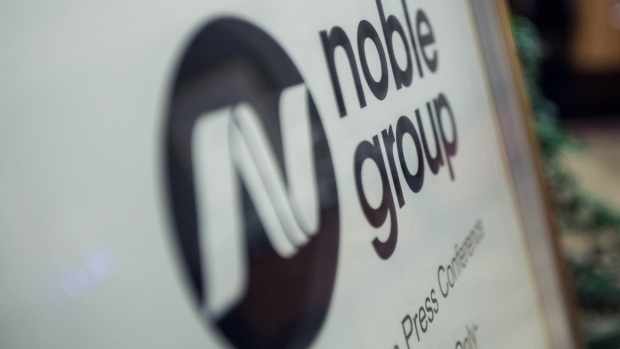 Noble Group Ltd. signage sits on display outside during an investor day in Singapore, on Monday, Aug. 17, 2015. Noble pledged to increase operating profit to more than $2 billion in the next three to five years as Asia\'s largest commodity trader sought to reassure investors about its long-term prospects. , Photographer: Nicky Loh/Bloomberg

(Bloomberg) -- The restructuring veteran brought in to rescue Noble Group after one of the most spectacular corporate collapses in the world of commodities is finally handing over.

More than a year since executive chairman Paul Brough, 62, told shareholders that he expected to be replaced, Noble Group Holdings Ltd. named James Dubow as his successor, though in a non-executive position. Dubow, who was appointed an independent director of the company in January, is a managing director of turnaround firm Alvarez and Marsal in Hong Kong.

“The company would like to thank Paul for his hard work, dedication and leadership throughout the restructuring,” it said in the statement. “Mr. Dubow will have oversight of returning Noble Holdings to solid long-term growth, following its successful restructuring.”

Brough, a rescue specialist who helped liquidate Lehman Brothers’s assets in Asia, replaced founder Richard Elman as chairman of Noble in 2017, as the trading company teetered after years of losses, mounting debt and accusations of improper accounting. Months into the job, as the company shed assets in a bid to survive, Brough told shareholders he was determined to prevent the same fate that befell the Wall Street bank.

He ultimately did manage to avoid bankruptcy through a $3.5 billion debt restructuring that was finally completed in December, handing control to a group of senior creditors. But the revamped company that he leaves behind is a shadow of its former self.

Once Asia’s largest commodity trader with a market capitalization of $12 billion and businesses spanning U.S. natural gas to grains trading, Noble shed almost all of its physical assets in its battle to stay afloat. The newly restructured company had net profit of $16 million in the second quarter.

A shadow also looms over the company in the shape of an ongoing investigation into its accounting by Singaporean police and regulators. The surprise probe launched in November almost derailed the restructuring as authorities refused to allow the trader to relist its shares in the city state. Brough was forced to pursue his Plan-B in Bermuda, where a court appointed an officer to carry out a kind of insolvency process.

Brough’s exit comes months after former Chief Financial Officer Paul Jackaman left the company by “mutual agreement.” Along with Chief Executive Officer Will Randall, Jackaman was a director of the Noble subsidiary that’s at the heart of the accounting probe during the period under investigation, and were said to be considered “persons of interest” by Singapore.

A fluent Mandarin speaker, Dubow has over 30 years experience of Asia, according to the statement. His primary focus is helping companies achieve their growth goals following a restructuring or acquisition, it said. Alvarez and Marsal led the global wind-down of Lehman brothers after it filed for bankruptcy in 2008.

To contact the editors responsible for this story: Phoebe Sedgman at psedgman2@bloomberg.net, Alexander Kwiatkowski