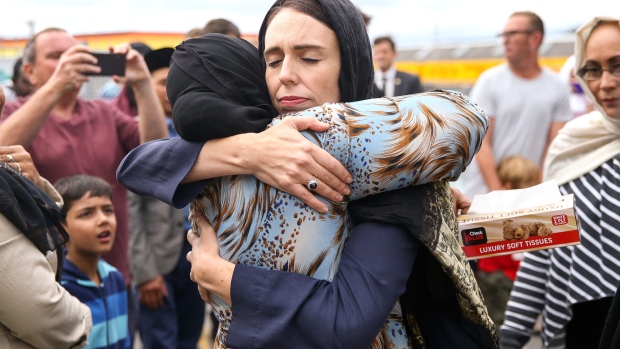 (Bloomberg) -- New Zealand Prime Minister Jacinda Ardern said she will never speak the name of the terrorist accused of gunning down 50 people in attacks on two Christchurch mosques on Friday.

“He sought many things from his act of terror, but one was notoriety, and that is why you will never hear me mention his name,” Ardern told parliament Tuesday as lawmakers paid tribute to the victims of the massacre. “He is a terrorist, he is a criminal, he is an extremist, but he will, when I speak, be nameless. To others I implore you, speak the names of those who were lost rather than the name of the man who took them.”

Ardern has won plaudits for her handling of the worst mass shooting in New Zealand’s modern history, in particular the empathy she has shown to the country’s Muslim community. She opened and closed her comments today in Arabic.

To contact the reporter on this story: Matthew Brockett in Wellington at mbrockett1@bloomberg.net

To contact the editors responsible for this story: Edward Johnson at ejohnson28@bloomberg.net, Michael Heath