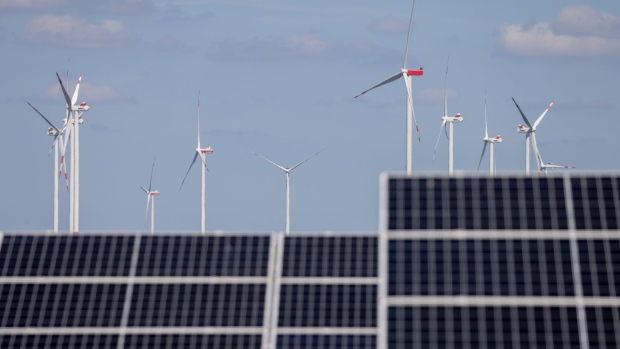 Onshore wind turbines at a wind farm beyond solar panels at the Weesow-Willmersdorf solar park, operated by EnBW Energie Baden-Wrttemberg AG, in Werneuchen, Germany, on Tuesday, Aug. 2, 2022. The European Union seeking to double solar capacity to 320GW by 2025 and to hit 600GW by the end of the decadewhich would make solar Europe's biggest source of electricity, whereas today it's not even in the top five. , Bloomberg

(Bloomberg) -- Subscribe to Zero on Apple, Spotify or Google.

Already booming, the $2 billion carbon offset industry is poised to keep growing. The US is even incorporating offsets into efforts to fulfill international climate pledges. There’s just one problem: In the 30 years since carbon offsets were created, they haven’t been proven to work.

“Carbon offsets are trying to do two different things — and to some extent, those things are potentially contradictory,” says Mark Trexler, who helped create the first carbon offset project in Guatemala back in 1988. The first is to mitigate climate change and the second is to reduce the cost to companies and countries of curtailing their carbon footprint. Unfortunately, Trexler says, cost ends up getting “the biggest seat at the table, as opposed to ‘Let's make sure this is actually mitigating climate change.’”

At the heart of a carbon offset is the idea that a company can emit carbon dioxide in one part of the world and offset it by buying credits that support an action to remove or avoid emitting the equivalent amount of carbon elsewhere. But if that action — for example, the construction of a solar farm — would have happened anyway, the “offset” part becomes a bit of a mirage: The company gets its offsets, but no additional carbon has been avoided or taken out of the atmosphere.

Texler laments the ineffectiveness of the industry he helped give life to, although he has hope that the concept can still work. “This is sort of like the recent inventor of the Labradoodle apologizing to the world for inventing Labradoodles, because it’s become this Frankenstein in the dog world” he says, “When this first started, this was a great idea.”

You can listen to the full conversation with Trexler below, and read a full transcript here. Check out more episodes of Zero, and subscribe on Apple, Spotify and Google to get new episodes each week.