For the most part, it’s all noise and while the degree of spending and taxation does matter for earnings and earnings drive the markets along with interest rates and inflation expectations, the current debt ceiling dance is a lot of noise. History shows that government shutdowns have had mixed results. And while that risk has been kicked to December for now, debt default risk is coming up quickly. 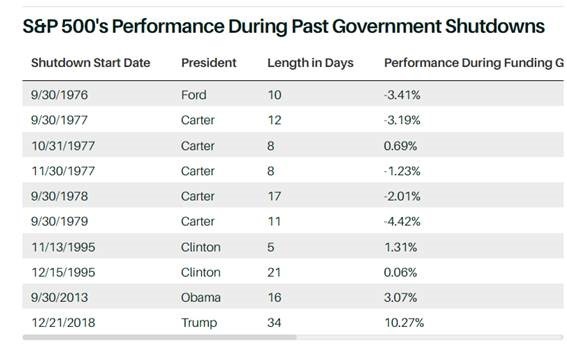 One of my favourite macro analysts, Larry Macdonald, best selling author of A Colossal Failure of Common Sense and founder of the Bear Traps Report will join me this week to talk macro and we’ll focus on the shenanigans in Washington surrounding the political fight over debt ceilings, budgets, and infrastructure.

Macdonald suggests that many investors are most interested in whether or not McConnell will cave and help lift the ceiling eventually? There are two off-ramps, two paths* towards lifting the ceiling. The GOP is trying to pin the debt ceiling increase on the Dems, to them, this is an important chip they want in their back pocket heading into the November 2022 midterms. The Dems want to spend in a big way. They will do whatever it takes to sell inflation as transitory, they want revenge for the 63 House seats and nine senate seats lost in the 2010-2014 elections. They believe GOP forced austerity (2010-2016) was the growth killer and they desperately want to go big now, BEFORE the midterms. Likewise - Hawks are being sacked left and right inside the Fed as we speak. It's a real hawk purge. We think the Dems want a left, MMT style shift at the Fed. Dems want to use the newly appointed Doves to help finance a colossal fiscal expansion. We just don´t see enough foreign demand for US Treasuries looking out 12-18 months if the Dems GO BIG.

Path 1: Dems agree to fold the ceiling into reconciliation and pass that entire bill, which is probably now closer to $2TR top line (not sure how much offset via tax increases but could be $1TR or more). The downside (for Dems) in our view is that it gives Manchin/Sinema/Tester/ (the blue dogs) a lot of leverage to take the top line/tax hikes down. Or does it give progressives more leverage? They might not care about a default. Progressives - Nancy - Chuck and the Blue Dogs all come together and pass a $2T reconciliation bill and raise the debt ceiling, yes, but this is two to three weeks away MINIMUM with a lot of drama before any deal.

Path 2: Wait until the bitter end and hope McConnell will cave. The risk of that option is a potential credit downgrade from the rating agencies. Fitch already warned this Friday, saying political brinkmanship with the debt ceiling could lead to them to downgrade the U.S. sovereign credit. Corporates can not have a higher credit rating than the sovereign so the risk of a sovereign downgrade could reverberate through the credit space (although limited initially until an actual downgrade does occur). More realistic is an equity selloff to pressure politicians on both sides of the aisle to agree on a timely debt ceiling increase. This is what happened in 2011.

The next two weeks are critical. The CBO estimate of a debt ceiling breach is between Oct. 15 and Nov. 5. If we take the average, Treasury may start to (technically) default on its debt around Oct. 25 (Yellen's 18 Oct. estimate is deemed conservative). If we assume reconciliation can still pass through the committees and get on the floor in 2 weeks, it means that without any progress in the early part of the week of Oct. 11, markets will start to discount the increased risk of a technical default. Fitch warned last week that a downgrade is possible. S&P broke the US “AAA” rating in 2011. A second downgrade has meaningful implications.

The Treasury will be out of cash to pay bills in the coming weeks. This chart is updated weekly if you want to follow along.

Interestingly, all this just as very optimistic Q3 earnings are hitting the tape.

Our Fall 2021 Investors Guide to Thriving Virtual Roadshow will begin Oct. 7 and run every week until Dec. 9. Each week we will cover a key part of your portfolio from how to protect against inflation risks to generating yield and income. This week we will have Larry Macdonald as our guest to discuss macro market risks and opportunities and to take your questions. We’ll look at his top ETF picks and where the best opportunities lie even as Washington is dysfunctional.