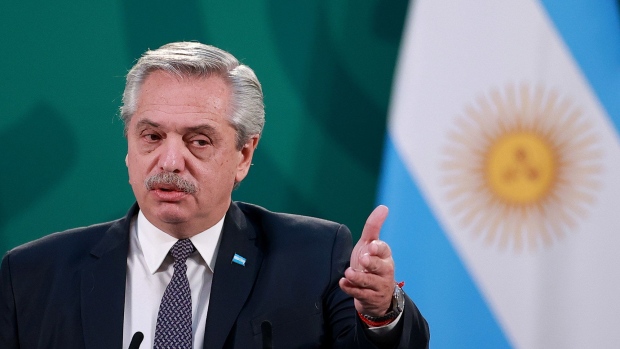 (Bloomberg) -- Argentina’s President Alberto Fernandez said the country is “absolutely” committed to reaching a deal with the International Monetary Fund.

Fernandez at the same time made clear that his government won’t risk rushing into an agreement if it’s a poor one for Argentines, in comments delivered at the closing of an event with top business leaders.

“We’ll keep discussing until we’re sure we’ll have the resources to make Argentina stand on its own two feet again,” he said. “Only then, will we start paying the debts we’ve inherited.”

The country needs a reduction on the existing interest rates on its debt with the IMF as well as more time to pay back the loan, Fernandez added. Argentina had previously asked the IMF to consider temporary relief on commissions charged to countries that use the lender’s credit lines extensively, as well as to conduct a comprehensive review of these policies.

The president’s remarks come just after Economy Minister Martin Guzman spent the week in Washington D.C. holding technical and high-level meetings with Fund officials to rework a plan worth over $40 billion, including a Tuesday meeting with IMF chief Kristalina Georgieva. Talks have so far been slow, in part due to Argentina’s upcoming congressional elections to be held in November.