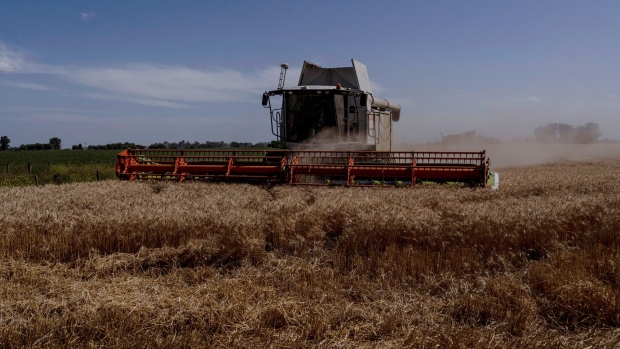 (Bloomberg) -- Argentina’s government has asked the country’s crop export and processing companies to make sales equivalent to $1 billion over the next week as it seeks to bolster reserves, according to people with direct knowledge of the discussions.

The government discussed with Ciara-Cec, a group that represents more than 40% of Argentina’s exports, a mechanism implemented this week that aims to encourage the sale of crops and bring in hard currency to the country. Members of the association have showed willingness to cooperate but have not said to what extent it will comply with the request, said the people, who asked not to be named because talks are private.

Representatives for Ciara-Cec, the economy ministry and the central bank did not immediately reply to a request for comment.

The move comes as Argentina’s reserves fall to dangerously low levels. Shipments of oilseeds and grain were worth almost $33 billion last year, but this year sales of soybeans that growers harvested from late-March to June have been slower amid high inflation and bets that the government will eventually weaken the currency, improving terms for farmers.

Read More: Inflation at 64% Has Argentine Soy Farmers Hoarding All They Can

Growers sold 20.9 million metric tons through July 20 of the 44 million tons they produced, according to the government, leaving roughly $13 billion still to trade based on Argentine spot prices.

While farmers have been slow to sell their crops, exporters play a role, too. Because of so-called delayed-price contracts in Argentina, over a third are still unpriced. Companies may keep these supplies at ports until farmers lock in prices to avoid holding a long position on the peso.

To pressure the companies, the government has said it might delay monthly tax returns, which would increase their costs, said one of the people.

In the meeting, the government executives also said the plan is for greenbacks to enter through a new mechanism developed by the central bank. The method proposes that crop exporters bring dollars into the country equivalent to exports they expect to make in the near future and hold them in a local bank account, receiving an interest rate. As an incentive, the central bank will offer private banks a new 180-day note, known as Nodo, allowing them to pay interest on exporters’ deposits.

Participants of the discussions include Economy Minister Sergio Massa, the head of customs Guillermo Michel and incoming central bank vice-president Lisandro Cleri and the president of Ciara-Cec, Gustavo Idigoras. Massa had said in an Aug. 3 speech that he would work to get exporters to bring in $5 billion in the next 60 days.

The details of the Nodo instrument will be announced today, according to one of the people. At a Thursday board of directors meeting, the central bank discussed changes that would avoid a mismatch between the term of the notes and the settlement currency. By allowing the note to be paid in pesos, international banks’ capital requirements would not be affected.

An international bank is already receiving inquiries from large crop exporters on the mechanisms to enter the amounts into the country next week, one of the people said.