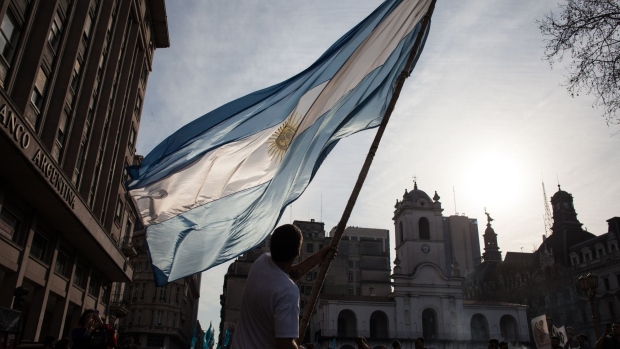 A demonstrator waves an Argentinian flag during a rally on the one-month anniversary of the disappearance of activist Santiago Maldonado in Buenos Aires, Argentina, on Friday, Sept. 1, 2017. Maldonado disappeared during a protest, when police detained a group of Mapuche Indians, demanding the release of a jailed Mapuche leader. , Bloomberg

Due to central bank regulations, holders of Argentine bonds denominated in dollars and issued locally cannot receive principal or coupon-payment proceeds abroad, settlement company Clearstream said in a statement on its website. Foreign currency to be collected will remain on hold until further notice, the company said.

Argentina unveiled a series of capital controls at the start of this month as President Mauricio Macri responded to a plunging peso draining government reserves after his poor showing in a presidential primary vote. Among the measures is one that limits non-residents to extracting a maximum of $1,000 per month from the country-- a negligible amount for some investors.

“This restriction implies that any income and redemption proceeds due in currencies other than Argentinian pesos may not be collected on or paid to any account held by any legal person outside Argentina,“ according to the Clearstream statement.

The impact on corporate-bond payouts came to light after a Clearstream statement dated Sept. 10 noted that it was keeping “on hold” the proceeds from a bond by real estate holding firm IRSA Inversiones y Representaciones that matured Sept. 9. Because Clearstream is considered a “legal person,” even if the underlying owners are retail investors they are also affected by the capital controls, it added.

IRSA said in a notice sent to the securities regulator that while it paid its bond in a timely fashion, it was aware that holders with custody abroad had not been able to collect their payments. In its statement, the company advised holders who did not receive capital or interest payments to consult their custodians on the applicable foreign exchange rules.

Among the options to take money out of Argentina, some investors have turned to an operation known as the “blue-chip swap rate,” through which they purchase certain types of shares or bonds in the local market with pesos, and subsequently sell those securities abroad for dollars.

--With assistance from Jorgelina do Rosario.

To contact the editors responsible for this story: Daniel Cancel at dcancel@bloomberg.net, Christopher Anstey