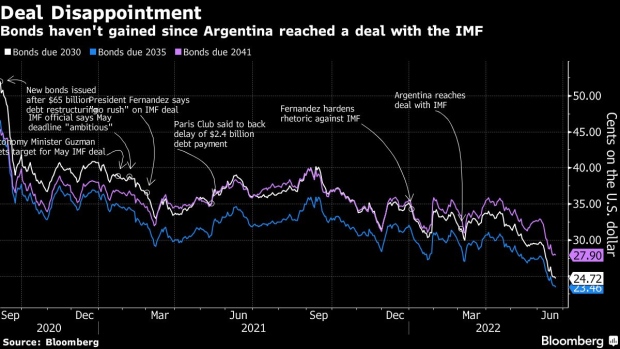 The nation’s $16.1 billion in dollar-denominated bonds due 2030 slid 0.3 cent to about 25 cents on the dollar, the lowest since they were issued almost two years ago. Spreads over US Treasury yields surged to their widest since the nation exited default in 2020, up 280 basis points this month to 2,200 points, according to a JPMorgan index.

Argentina’s dollar bonds have tumbled as the fastest inflation this century pushes up the cost of servicing index-linked bonds that make up 80% of the government’s domestic debt load, raising concern over sustainability. At the same time, foreign-currency reserves are falling and the peso is weakening on the parallel market. All that on top of a global flight from risky assets on recession fears as the Federal Reserve hikes rates.

Argentina’s central bank lifted its benchmark interest rate for the sixth time this year last week, pushing it to 52% in a bid to cool inflation expectations. It may not be enough.

“A 1980s-style spiraling of inflation is a real risk for the Argentine economy, and the probability attached to it is rising,” Citi analysts Fernando Jorge Diaz and Ivan Stambulsky wrote in note Wednesday.