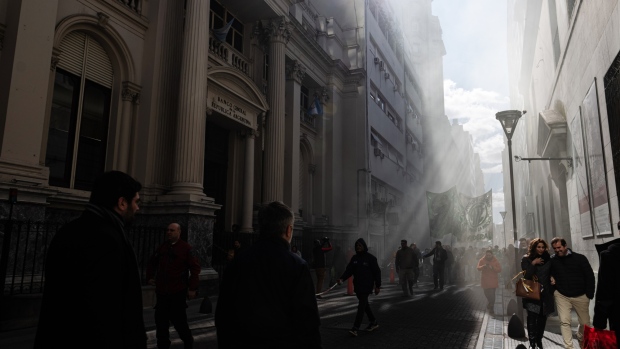 A demonstration passes in front of the Central Bank of Argentina in Buenos Aires, Argentina, on Tuesday, Aug. 13, 2019. , Bloomberg

(Bloomberg) -- After a brief respite at the end of last week, Argentina’s debt is getting hammered again.

The nation’s offshore notes declined about 6% on Monday after the country was downgraded deeper into junk territory by two of the three biggest ratings companies and following the resignation of Economy Minister Nicolas Dujovne on Saturday.

The extra yield investors demand to own Argentine bonds over U.S. Treasuries widened 132 basis points to 17.86 percentage points while 100-year securities fell nearly 4 cents to 48 cents on the dollar to yield 14.85%. Local markets are closed on Monday for a holiday.

Traders will pay close attention to the delegation from the IMF expected to arrive in Buenos Aires later this week for meetings with the government and opposition ahead of a decision on whether to disburse about $5 billion of additional funds next month. The nation’s reserves fell $3.9 billion last week to $62.4 billion, the lowest since December.

The sharp market selloff prompted by a surprise result in the Aug. 11 primary election showing opposition candidate Alberto Fernandez with a commanding lead over incumbent Mauricio Macri is complicating the government’s ability to both contain economic fallout and resume the campaign to retain the presidency. Macri will meet with new Economy Minister Hernan Lacunza as well as the Central Bank President Guido Sandleris on Monday.

Late last week, Fitch Ratings cut Argentina’s long-term issuer rating to CCC from B and S&P lowered the country’s sovereign rating to B- from B and slapped a negative outlook on it, citing Argentina’s “vulnerable financial profile” and the slump in asset prices following the primary.

The rating actions were already reflected in the market where credit default swaps price in a more than 80% chance of default over the next five years. Markets are now focusing on upcoming debt payments as rollovers for local notes are expected to be much more challenging.

Argentines vote for president on Oct. 27 and the next government would take over on Dec. 10.

To contact the editors responsible for this story: Julia Leite at jleite3@bloomberg.net, Daniel Cancel