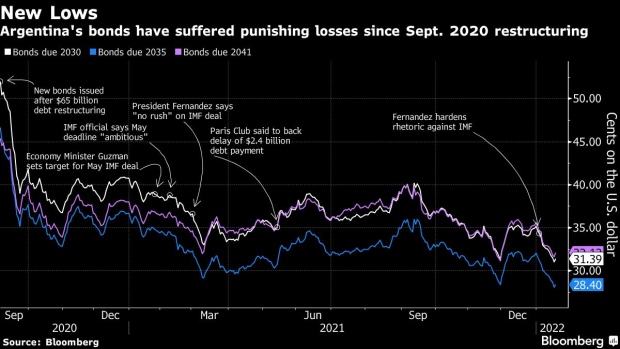 Vehicles travel on Corrientes Avenue in front of the Obelisque monument in Buenos Aires, Argentina, on Friday, April 23, 2021. The Covid-19 pandemic has sent a wave of poverty racing across Latin America, deepening declines that began over the past decade and consigning millions to lives of deprivation. , Bloomberg

(Bloomberg) -- Argentine bonds are testing new lows as concern grows that the government will struggle to reach a refinancing deal with the International Monetary Fund before large payments come due in March.

Hostile remarks from Vice President Cristina Fernandez de Kirchner and Economy Minister Martin Guzman this week are helping fuel the pessimism that prevails in Buenos Aires. Traders are speculating that while it’s most likely that the parties will eventually come to an accord, the path to getting there will be rocky enough to spur further volatility in the country’s bond market.

“The situation looks completely paralyzed, and I have no confidence at this time that an agreement is going to be made by March,” said Joaquin Almeyra, a fixed-income trader at Bulltick LLC in Miami. “Something needs to happen that will force Argentina into an agreement.”

Investors say that the government needs to reconcile its differences with the lender before almost $2.9 billion in IMF debt comes due, given that the country’s depleted reserves suggest it would struggle to make the payments. The fundamental issue in the talks is just how fast and to what extent Argentina will have to cut its budget deficit to win the IMF’s blessing for a revised timetable to pay back some $40 billion in debt.

Argentina’s bonds due in 2046 fell to 28 cents on the dollar this week, the lowest level since being issued in September 2020. That pushed the yield toward 15%, deep into what’s considered distressed territory.

As the talks continue via virtual conferencing with the Washington-based lender, officials in Buenos Aires have been criticizing the fund for what they see as its hardline stance. Guzman said on Monday that the IMF would suffer damage to its reputation if it failed to reach an agreement with Argentina.

Fernandez de Kirchner also slammed the IMF program’s costs in the context of the country having to spend so much on pandemic relief.

There’s no doubt that some of the jawboning is likely driven by an effort to score political points with the more populist wing of Argentina’s ruling coalition. But the Economy Ministry will eventually need to reveal details of the fiscal adjustment, and it seems as if officials are trying to put that off for as long as possible, according to Graham Stock, a senior emerging-market sovereign strategist at Bluebay Asset Management in London.

“Guzman and the IMF are probably not too far apart on the central fiscal program,” Stock said. “But an IMF program requires the publication of very comprehensive projections, and at that point the unity of the government will be tested.”

A spokesman for Argentina’s Economy Ministry declined to comment.

In the meantime, Alberto Fernandez’s administration is seeking to drum up international support for its cause. Foreign Minister Santiago Cafiero held a bilateral meeting with U.S. Secretary of State Antony Blinken on Monday, who encouraged a positive resolution to the talks.

Separately, there also seems to be an effort underway to meet with officials from countries that could provide new financing to Argentina. Fernandez will meet with Russian President Vladimir Putin on Feb. 3 in Moscow, as well as Chinese President Xi Jiinping on Feb. 4.

If Argentina doesn’t reach an agreement with the IMF before the next payments are due, the country risks becoming more economically isolated with slower growth and faster inflation, Siobhan Morden, head of fixed income research at Amherst Pierpont in New York, wrote in a note. She says bond prices could fall into the low 20s without a deal. Even with an accord, prices likely won’t climb above 40 cents until investors see Argentina actually complying with the program’s targets.

A default on the IMF debt, just two years after Argentina defaulted on $65 billion in bonds held by private creditors, would also be politically costly for the government ahead of next year’s general elections, according to Alberto Bernal, the chief strategist at XP Investments in Miami.

“The question is whether they get to an agreement before Argentina enters a major financial crisis,” Bernal said.