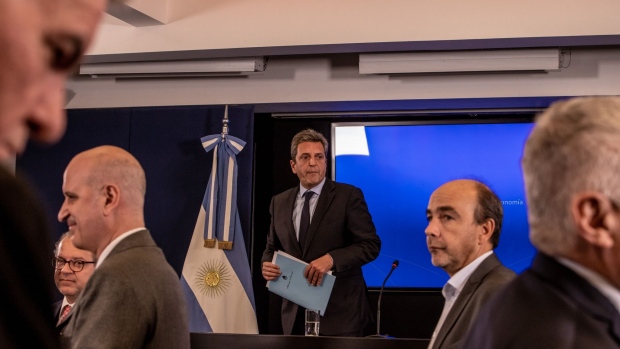 Sergio Massa, Argentina's economy minister, center, during a press conference at the Economy Ministry building in Buenos Aires, Argentina, on Wednesday, Aug. 3, 2022. New Economy Minister Massa is preparing a set of measures to address one of Argentina’s key problems: a chronic shortage of dollars that has caused the US currency to soar in parallel exchange markets. , Bloomberg

(Bloomberg) -- Argentina is reviving a currency measure to boost soy exports and prop up central bank reserves that generated backlash from the International Monetary Fund.

The government is giving a temporary exchange rate for soy exporters between Monday and Dec. 30, setting the new rate at 230 pesos per dollar, according to an Economy Ministry statement published Friday night. That’s much more lucrative that the official exchange rate of 166 per dollar that exporters currently get.

Argentine officials rolled out an identical measure in September, which helped to boost soy exports to $8 billion, but violated the conditions of Argentina’s $44 billion plan with the IMF. The Washington-based lender had to approve a waiver for Argentina because of the policy. IMF leaders also warned that Argentina should avoid such currency practices, with its head Kristalina Georgieva noting that “they are not a substitute for sound macroeconomic policy.”

Economy Minister Sergio Massa said in a tweet Friday that the main crop export association had committed to export at least $3 billion while the temporary exchange rate is in place. One goal behind the measure is to ensure Argentina can increase the central bank’s net cash reserves to comply with a key target in the IMF program.

Massa is sending a delegation to Washington for technical discussions with IMF staff to discuss the third review of the program.