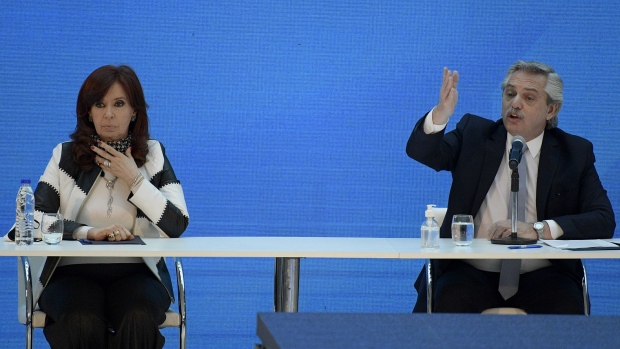 Interior Minister Eduardo de Pedro sent the president a resignation letter, according to a document sent by his spokesman. The ministers of justice and sciences also offered to step down, along with at least two other senior appointed officials, according to newspaper La Nacion. All of them are part of Fernandez de Kirchner’s far-left groups within the ruling coalition.

The cabinet shake up exposes the internal divide within Frente de Todos, as the broad coalition is known, between Fernandez’s more moderate wing and the loyalists to Fernandez de Kirchner, who governed the country between 2007 and 2015. It’s also the biggest political upheaval since Fernandez took office in December 2019.

A spokesman for Fernandez didn’t immediately respond to a request for comment.

On Sunday, the government coalition was soundly defeated in the majority of congressional races, including Buenos Aires province, a key battleground. Fernandez, who has resisted doing cabinet changes after the vote, is expected to unveil new economic measures as soon as Thursday aimed at winning back voters before the midterm vote on Nov. 14.