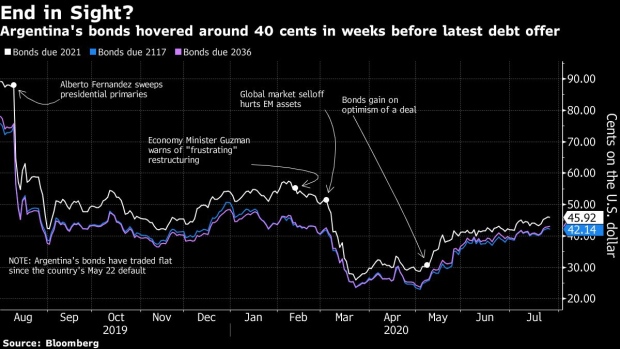 (Bloomberg) -- Argentina’s main bondholder groups say they now represent more than 50% of the country’s overseas debt, potentially strengthening their bargaining power at a crucial time in the country’s bond restructuring.

A group of creditors seeking to extract better terms from the government in its $65 billion debt restructuring says they have added large funds to their bloc, according to people with direct knowledge of the matter. Thirty investment funds, some of them part of the Ad Hoc Bondholder group, the Exchange Bondholder group and the Argentina Creditor Committee, sent a letter to Economy Minister Martin Guzman on Monday saying they hope to reach a consensual agreement, according to a copy obtained by Bloomberg News.

The move boosts the creditors’ position as the government aims to reduce its outstanding foreign debt after defaulting for the ninth time in its history. While government officials have repeated that the last offer is the best the country can do in financial terms, it may support “adjustments” to the legal terms of the contracts. The deadline for its proposal is August 4.

Argentina’s creditors, which formed a united bloc last week for the first time since the talks began, have rejected the government’s existing proposal and suggested a new offer of their own. The group added enough large funds to potentially be able to block the government proposal, one of the people said, adding that some of these firms didn’t sign the letter to the government because they prefer not to be named publicly.

The letter adds that combined, the funds represent 60% of bonds outstanding from the country’s previous restructurings -- known as exchange bonds -- and 51% of the outstanding global bonds issued from 2016, according to the document seen by Bloomberg.

The creditor group had said last week that it collectively represented one third of the country’s outstanding bonds.

Argentina needs at least 66.6% of all bondholders to participate in a bond exchange for it to be valid, according to the latest filing with the Securities and Exchange Commission.

The government would also consider the offer to be valid if holders representing at least 60% of one or more series of the 2005 indenture bonds and 2016 bonds participate in the exchange, or if the equivalent of more than 50% of all eligible bonds for each indenture take part.

(Updates to add names of investments funds that signed letter in sixth paragraph.)