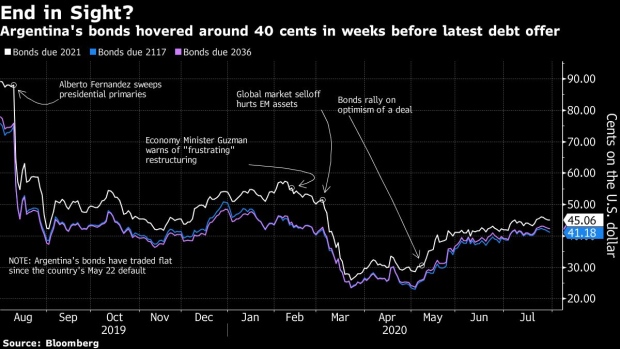 Traffic passes by the Obelisk of Buenos Aires in Buenos Aires, Argentina, on Friday, June 19, 2020. Coronavirus cases may peak in Argentina sometime between the end of June and beginning of July despite cases and virus-related deaths increasing at a faster pace, according to Health Minister Gines Gonzalez Garcia. Photographer: Erica Canepa/Bloomberg , Bloomberg

(Bloomberg) -- Argentina’s creditors have approached several international organizations to seek endorsement for a proposal to change the rules that govern some of the country’s overseas securities, according to people familiar with the matter.

The International Monetary Fund, the U.S. Treasury, the International Capital Market Association and the Institute of International Finance are among the organizations that have been informally approached by bondholders, said the people, who asked not to be identified discussing a private matter.

While the groups have no formal say over how bond contracts are worded, the idea is that their buy-in would give Economy Minister Martin Guzman political cover to accept the changes, which bolster creditors’ rights by closing legal loopholes for Argentine bonds issued in 2016 and later. The changes to the indentures is a key point of negotiation in the final stretch of talks between Argentina’s government and major creditors including Blackrock Inc., Ashmore Plc and Fidelity Management and Research Co.

Currently, the bonds’ collective action clauses are written in such a way that Argentina could push through a restructuring without broad support from its bondholders through so-called “pac-man” and redistribution strategies. Investors want to make it harder for Argentina to engage in those tactics, which take advantage of how the CACs are structured.

Guzman said in a online event Thursday the country would adopt the changes if they are supported by the international community.

Argentina and its major creditors are entering the final stages of monthslong talks to restructure $65 billion of securities, which the government said it couldn’t pay even before the coronavirus further battered the shrinking economy. The gap between the two sides’ negotiating positions is only about 3 cents on the dollar on a net present value basis, according to Goldman Sachs Group Inc and Morgan Stanley analysts.

The government’s latest debt offer to bondholders will expire on Aug. 4, unless extended.