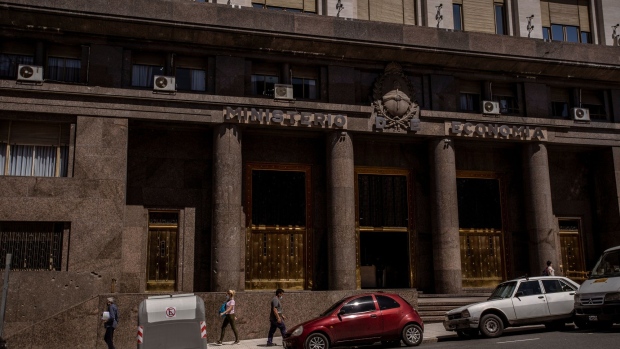 The Ministry of the Economy in Buenos Aires, Argentina, on Friday, Feb. 25, 2022. Argentina's economy capped a strong second half of growth as it emerged from a long recession last year ahead of an expected new deal in the coming weeks with the International Monetary Fund. , Bloomberg

(Bloomberg) -- Argentina exchanged more than half of its local debt obligations due at the end of the month in a swap that drastically reduces pressure on the government to meet a key rollover tender next week.

The Economy Ministry exchanged 358 billion pesos ($2.9 billion) in local securities due at the end of the month for new notes maturing later this year, according to an emailed statement. The exchange amounted to around 60% of more than 600 billion pesos of local debt due on June 30.

The operation comes after a steep sell off in Argentina’s local market earlier this month in which investors yanked cash from funds focused on inflation-linked assets on speculation that the large local debt burden would prove unsustainable for the government. The local market jitters, along with inflation running above 60% and a global sell-off in risk assets have caused Argentina’s overseas bonds to tumble to record lows.

The fund manager arm for the state-run pension agency Anses, which held about 15% of the upcoming maturities, was said to have participated in Wednesday’s swap, according to one person with direct knowledge of the matter. An Anses spokesperson didn’t immediately reply to a request for comment on the its participation.

The central bank is also a large holder of the bonds coming due at the end of the month, with over 35% of the upcoming short-term debt, according to another person with direct knowledge. A central bank spokesperson declined to comment on its participation in the swap.

The Treasury organized the exchange ahead of a local debt sale to be held next Tuesday, in which the government will be looking to auction around 248 billion pesos in securities, according to a statement.

Even though the upcoming maturities decreased with Wednesday’s swap, it may still be a challenge for the government to reach that goal, according to Juan Manuel Pazos, chief economist for brokerage TPCG Valores in Buenos Aires.

“There are going to be some creditors who want to cash out and reduce exposure to Treasury securities,” Pazos said. “Some are going to seek other alternatives.”