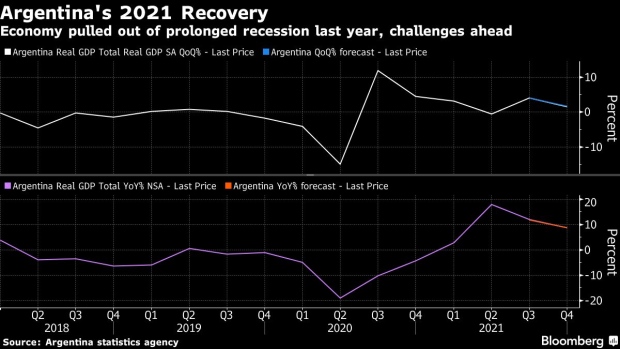 (Bloomberg) -- Argentina’s economy grew less than expected in the fourth quarter but still had its best year since 2004 as the country emerged from a long and deep recession exacerbated by the pandemic.

Gross domestic product expanded 1.5% in the final three months of the year from the previous quarter, below economists’ expectations for 1.7% growth. GDP rose 10.3% in 2021, the best performance since the series began in 2004, according to data from the nation’s economic statistics bureau published Wednesday.

The unemployment rate fell to 7%, its lowest level since 2015, according to separate official data also published Wednesday. Salaried employment at the private sector has almost completely recouped losses seen during the pandemic, adding 188,000 jobs last year.

South America’s second-largest economy had been enjoying annual growth rates of about 10% in the past few months as it recovers from a very low base following a recession that started in 2018. Yet consumer prices rising more than 50% a year have largely eclipsed such gains, prompting President Alberto Fernandez to recently declare “war on inflation.” The central bank on Tuesday raised its key interest rate to 44.5%.

Argentina’s recovery gained steam in the second half of 2021, when an accelerated vaccination campaign allowed the economy to safely reopen after months of strict lockdown. Investment and public consumption drove growth in the fourth quarter, compared with the previous three months.

Growth is now expected to cool down. The government forecast activity to expand between 3.5% and 4% this year in a staff-level agreement to reschedule over $40 billion in debt payments with the International Monetary Fund. But private economists surveyed by the central bank in February see more modest growth of 3% for 2022, even before taking into account the impact that Russia’s invasion of Ukraine is having on commodity prices and inflation.