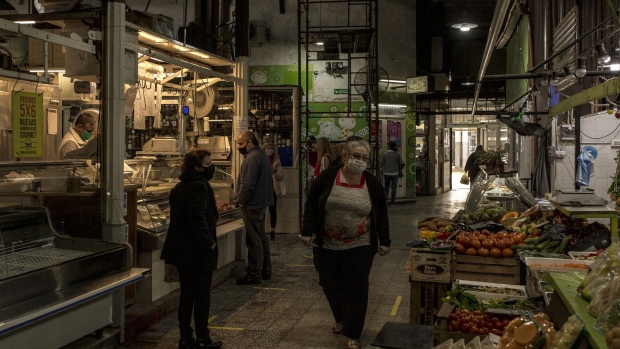 Shoppers wearing protective masks walk through a market in the Caballito neighborhood of Buenos Aires, Argentina, on Monday, July 20, 2020. Argentina, the Latin American country with one of the earliest and strictest lockdown measures, is moving into phase 3 of the reopening process as cases top 100,000. Photographer: Sarah Pabst/Bloomberg , Bloomberg

(Bloomberg) -- Argentina’s government is freezing prices on 1,432 household items in an effort to cool accelerating inflation ahead of November’s midterm election and the holiday season.

Prices will remain fixed until Jan. 7 on the products, a larger list than the roughly 900 items government officials had originally pitched to companies and supermarkets last week. Talks between the government and industry leaders on a price agreement fell through Tuesday after a few days of discussions.

It marks the latest chapter in Argentina’s tense relations with the private sector, following a failed nationalization of a soybean exporter, temporary export bans and a prohibition on firing workers. Interior Commerce Secretary Roberto Feletti offered up a blunt assessment in his statement Tuesday.

“There are factions in the business leadership that aren’t conscious of their privileges and refuse to adopt a collaborative and contemplative attitude on the tough situation that the Argentine people are living through today,” Feletti said in a statement.

Inflation accelerated past expectations in September with consumer prices rising 3.5% from August, putting the annual figure at 53%. President Alberto Fernandez’s coalition faces a tough midterm election next month after it suffered a major defeat in a primary vote. Price controls are a common policy in Argentina that often prove futile.