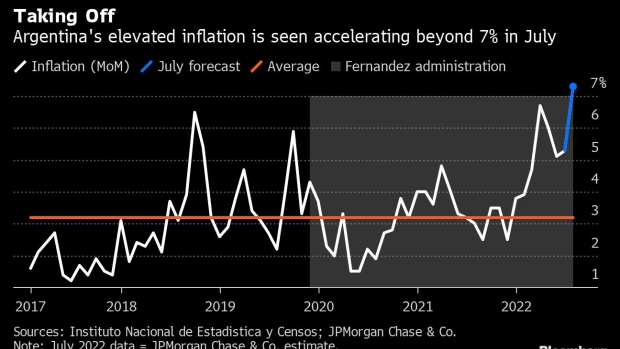 (Bloomberg) -- Argentina’s inflation rate for July and August will be at the highest levels since President Alberto Fernandez took office in late 2019, according to an Economy Ministry official, as prices spiked significantly further amid political turmoil.

Monthly inflation results can be expected to top the previous 6.7% high of Fernandez’s administration reached in March, the official said, requesting not to be identified discussing unpublished government projections. Economists at JPMorgan Chase & Co expect a 7.3% monthly rise in the July inflation data released Aug. 11.

Instability in the South American nation has been exacerbated by the abrupt exit of Economy Minister Martin Guzman in early July. He was briefly replaced by economist Silvina Batakis, who just this week was replaced by Sergio Massa, a career politician.

To fight dwindling foreign reserves, the government intends to slow the growth of imports in the second half of the year, according to the official. A surge of imports so far this year is draining much-needed dollars from the economy that are essential to prevent a potentially abrupt devaluation of the peso.

On the fiscal side, the government expects to save 500 billion pesos ($3.8 billion) from energy subsidy spending cuts in the coming months, according to the official.

Argentine officials also expect to conclude the second review of the government’s $44 billion program with the International Monetary Fund before the end of the month. The Fernandez administration expects that the IMF’s executive board approves the review in September, which would unlock another tranche of funding needed to refinance payments from a previous loan that the country has with the IMF.

Officials intend to discuss with IMF staff the target in the program for the central bank’s accumulation of net reserves, according to the person, who wouldn’t say if the target would change. In the program, Argentina’s central bank is projected to accumulate an additional $5.8 billion of cash reserves this year, but the target looks increasingly out of reach as reserves have declined in July.