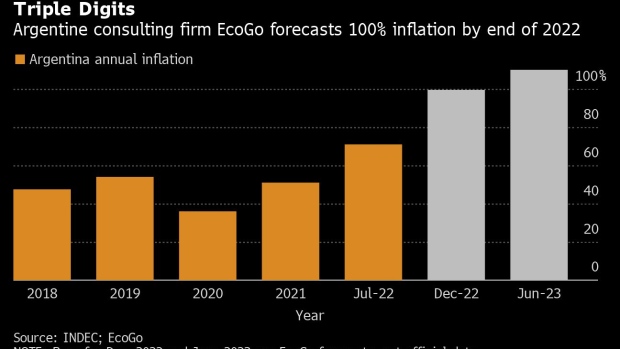 An attendee browses food products for sale during La Exposicion Rural agricultural and livestock show in Buenos Aires, Argentina, on Friday, July 29, 2022. The Rural Exposition brings together commercial and livestock exhibitors as well as producers, entrepreneurs and professionals from various agro-industrial businesses. , Bloomberg

(Bloomberg) -- Inflation in Argentina is expected to reach 99.6% by year-end and remain over 100% in the first half of next year, according to Buenos Aires-based consulting firm EcoGo.

Argentines are suffering through the highest annual inflation in three decades as global energy prices, economic policies and a currency rout have accelerated price increases this year. Some of the recent price pressure comes from widespread concern of a potential currency devaluation, reviving fears of past episodes in the crisis-prone economy.

Economy Minister Sergio Massa is in Washington this week to reassure US officials and multilateral institutions that he intends to implement Argentina’s $44 billion agreement with the International Monetary Fund, seen by investors as a key anchor to eventually stabilize inflation. Massa has committed to stop money printing for government spending this year and to reel in the country’s fiscal deficit as steps toward cooling prices too.

EcoGo, led by economist Marina Dal Poggetto, forecasts a very elevated August monthly inflation reading of 6.9%, though it would be a notch slower than the 7.4% registered in July that came amid a run on the currency. Regulated prices increased on health care, schools and transportation led to August’s high forecast, according to EcoGo’s report, which examines high frequency data.