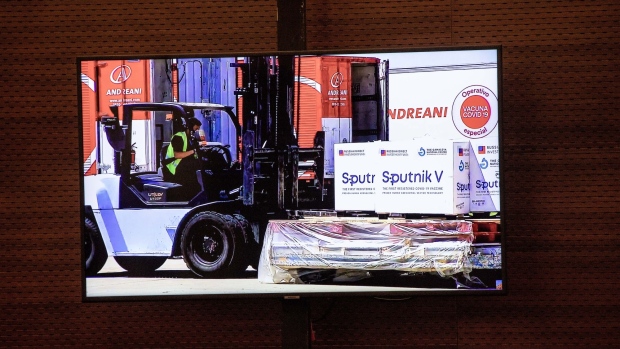 A screen displays images of the Russian Sputnik V vaccine arriving during a press conference at Ezeiza International Airport (EZE) airport in Buenos Aires, Argentina, on Thursday, Dec. 24, 2020. Argentina approved the emergency use of Russia's vaccine to combat the spread of Covid-19, becoming the first nation outside the former Soviet Union to authorize the shot. , Bloomberg

(Bloomberg) -- Argentina became the third country worldwide to begin inoculating its citizens against Covid-19 with the Sputnik V vaccine outside of trials, providing a boost to Russia’s attempts to push the shot into developing nations.

Vaccinations began simultaneously in the capital Buenos Aires and other provinces around 9 a.m. local time on Tuesday with some 300,000 people expected to be given the shot. Argentina’s health regulator gave swift emergency approval for the vaccine last week, following earlier clearances from Russia and Belarus.

“I think people have a lot of faith in the vaccine,” President Alberto Fernandez said on state television, according to Telam. “They aren’t paying attention to attempts to scare them.”

With the initiative, Argentina joins North America, the U.K., EU, China and Chile in offering preventive shots that are expected to bring the pandemic, its deaths and its disastrous economic effects, to an end. More than 1.7 million people have died worldwide from the new coronavirus that surfaced almost a year ago in China.

Controversy has swirled around Sputnik V since Russian President Vladimir Putin announced its registration for use before large-scale clinical studies were completed. Its developers have since said that an interim analysis of final-stage studies indicated it was more than 91% effective after volunteers received two doses.

The Kremlin is seeking to promote the Russian vaccine as a cheap, effective defense against the coronavirus. A course of two doses taken three weeks apart will cost $20, which is significantly less than shots being produced by Pfizer Inc. Over 50 countries have expressed interest in obtaining Sputnik V, according to its developers.

Russians remain skeptical of their homegrown vaccine, despite suffering one of the highest Covid-19 tolls globally. Only 38% are ready to take Sputnik V, according to a Dec. 21-23 poll conducted by the Levada Center.

Argentina became the first country outside the former Soviet Union to begin administering the shot, which has yet to publish data from late-stage trials in a peer-reviewed journal. Venezuela, however, has vaccinated 120 people with Sputnik in a trial, its health minister said on Sunday.

Argentina expects to receive 20 million doses of the Sputnik V vaccine over the next two months, and may add 5 million more in March. The government plans to prioritize health workers. Fernandez, 61, said earlier this month he would be among the first to take the vaccine to show that it’s safe.

Axel Kicillof, a former Economy Minister and current Governor of Buenos Aires Province was among the first to receive the shot, according to television network TN. He posed for photos and showed his vaccination card.

In the rest of Latin America, Mexico, Chile and Costa Rica have begun giving the Pfizer vaccine. Many other countries in the region are either awaiting final approval for the shot being developed by AstraZeneca Plc. and Oxford University or for deliveries from Covax, a World Health Organization-backed effort to provide a coronavirus vaccine to developing nations.

Brazil’s Sao Paulo state has partnered with China’s Sinovac Biotech Ltd., though publication of final-stage trial results has been delayed.

With a population of around 45 million people, Argentina ranks 11th worldwide in Covid deaths with 42,868 and 12th in cases with 1.6 million. After weeks of declines, Argentina’s Covid curve has begun to rise again amid more international travel and holiday gatherings.