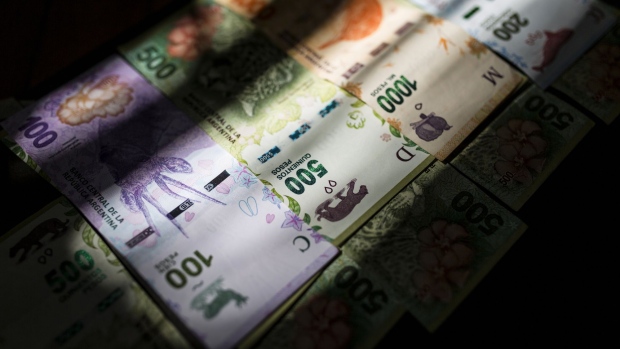 Argentine 100, 200, 500 and 1000 peso banknotes are arranged for a photograph in Buenos Aires, Argentina, on Saturday, March 30, 2019. Argentina's central bank has taken enough steps in the past month to prevent the recent slump in the peso turning into a repeat of last year's rout, according to strategists and traders. , Bloomberg

(Bloomberg) -- Argentina’s central bank will no longer allow banks to hold net cash dollar positions at the end of a trading day.

A regulation published late Thursday cut banks’ holdings of foreign currency to 0% of their net worth, known locally as RPC, down from 4% previously. That means that, at the market close at the end of the day, they cannot have additional holdings of hard currency. The rule becomes effective December 1.

The move adds to a string of restrictions to curb demand for dollars at a time when the peso remains under pressure due to high demand both in the official and parallel exchange markets. The spot peso is controlled by the central bank through a crawling peg.

Even with the restrictions, the central bank has spent $1 billion to defend the peso in the spot market since Oct. 28, according to official data that goes as far back as Nov. 18. The blue-chip swap, an implicit exchange rate derived from operations with assets that trade in pesos and dollars, has weakened 65% ​​since President Alberto Fernandez took office in 2019, to 219 per dollar on Nov. 24. Its gap with the official peso, which closed at 100.7 per dollar on Thursday, stands at around 120%.