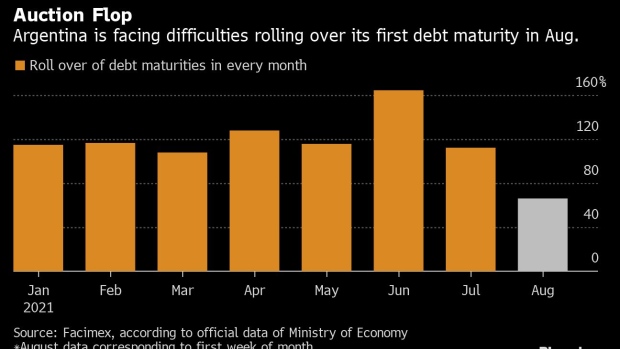 (Bloomberg) -- Investors sent a warning message to Argentina’s Treasury on Tuesday night -- don’t expect us to finance the government’s increased spending ahead of November’s midterm elections unless interest rates go up.

The Treasury managed to roll over just 146.3 billion peso ($1.5 billion) in local notes in Tuesday night’s local debt auction, 66% of its target, the worst rate in a government bond sale since mid-April.

Policy makers need to revert negative real interest rates after annual inflation soared to 50.2% in June from 36.1% at the end of last year, said Alejo Costa, chief Argentina strategist at BTG Pactual in Buenos Aires. At the same time, an expanding primary deficit ahead of September’s primary elections is fueling inflation concerns and investor demand for dollars. Something has to give.

“This is the only central bank in the world that keeps interest rates frozen irrespective of inflation,” Costa said. “At the end of the day, what they have to do is hike rates.”

The central bank has held its benchmark rate at or around 38% since March 2020, while President Alberto Fernandez has turned to a slew of unorthodox policy options like price fixing, subsidies and company fines, to control prices. That policy combination is under strain.

The government needs to roll over 100% of expiring debt and raise an additional 30% from here to the end of the year, according to estimates of consulting firm Arriazu Macroanalistas in Buenos Aires.

Still, the pressure will ease in the next few weeks with the Treasury facing only 6.9 billion pesos in maturities between Aug. 6 and 20, local brokerage Facimex Valores said in a report.

After that, when maturities pick up, it’s not only fiscal spending that may come under strain. The central bank could also struggle to maintain its policy of a slow, gradual depreciation of the peso.

“If low roll-over persists, the government will need to print more money, and as a result FX pressures will mount,” said Ramiro Blazquez, an analyst at BancTrust & Co. in Buenos Aires.