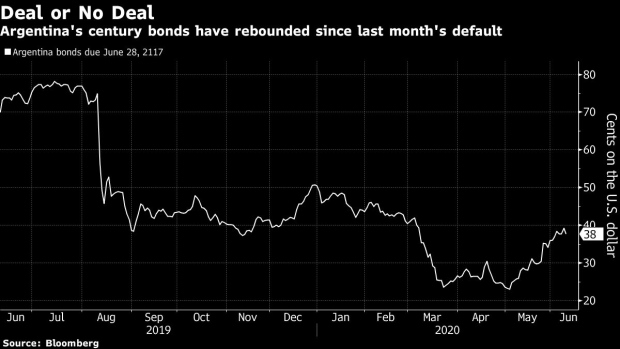 (Bloomberg) -- Argentine officials may offer warrants linked to the South American nation’s agricultural exports to close the gap with top creditors in debt restructuring talks, according to people familiar with the matter.

The idea is garnering support from some of the country’s biggest bondholders, said the people, who requested anonymity because the talks are private. They view Argentina’s export data as more transparent than figures on gross domestic product. GDP warrants have also triggered legal battles in the past.

The proposal could help bridge a divide between the government and its most prominent creditors. In recent days, Economy Minister Martin Guzman threatened to exclude several bondholders including Ashmore Group Plc from the next round of talks, some of the people said. But there’s a sense of renewed optimism now as some key investors sign non-disclosure agreements this week to return to the negotiating table.

Still, it’s unclear whether a deal can be reached by Argentina’s June 12 deadline. Other bondholders are reluctant to agree to an NDA, which comes with trading restrictions, until Guzman signals further concessions, the people said. There’s also concern that doing so could prevent investors from participating in an auction for the nation’s credit-default swaps on Friday, they added.

While Alberto Fernandez’s government has inched closer to a pact to restructure $65 billion in foreign debt since defaulting on May 22, a series of standoffs between his Ivy League-educated Economy Minister and big Wall Street firms have dented hopes of a quick accord. Guzman has clashed with one of BlackRock Inc.’s top negotiators, Gerardo Rodriguez, as well as Ashmore’s Chief Executive Officer Mark Coombs, some of the people said.

This is unusual territory for Ashmore and BlackRock, which have historically avoided high-profile roles in restructurings. Both firms rank among Argentina’s four largest reported bondholders, according to data compiled by Bloomberg. They built up their positions through distinct approaches -- Ashmore as an emerging-market specialist that piled into high-yield bets and BlackRock as a champion of passive investing across asset classes.

Ashmore Dials Up Another Risky Bond Bet After Big Blowups

Argentina said in its initial debt restructuring proposal it needs $40 billion in debt relief as it grapples with high unemployment, a currency crisis and a three-year economic contraction. The government has already extended its deadline multiple times and there’s an expectation it could happen again if there’s limited progress over the next three days.

Some of the nation’s largest creditor groups are calling on Guzman to close the remaining gap. The Ad Hoc Bondholder Group, which includes Ashmore and BlackRock, said last Monday that the difference between its offer and the government’s proposal was about 1.5% of gross domestic product spread across the next decade and another 1% of GDP from 2031 to 2040.

“It is up to Argentina to show a serious desire to bridge the remaining gap, and it will be unfortunate if Argentina instead hardens its position in response,” Dennis Hranitzky, the Exchange Bondholder Group’s legal adviser, said in a statement last Monday.