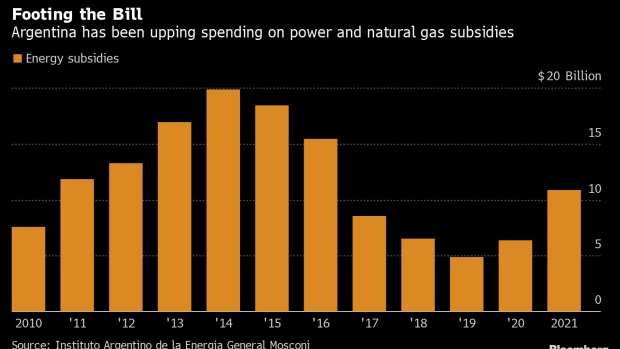 Natural gas burns on a domestic kitchen stove in Rome, Italy, on Friday, Dec. 24, 2021. European gas prices declined to near the lowest level in three weeks, with increased inflows at terminals in the region bringing relief to the tight market. , Bloomberg

(Bloomberg) -- Argentina is moving forward with subsidy cuts on utility bills in a bid to comply with its $44 billion program with the International Monetary Fund despite the political costs.

Officials rolled out the details of the subsidy squeeze they estimate will save fiscal spending equivalent to 0.5% of gross domestic product next year, according to Treasury Secretary Raul Rigo, who spoke alongside other officials at a Tuesday press conference. Rigo estimated savings from the reductions this year would be about “a third” of next year’s figure.

The plan is to impose the steepest increases on high earners and shield low-income users from the same treatment across gas, electric and water bills. The government is also asking citizens to ration their energy use at home.

“The segmentation has been designed with a distribution criteria based in social justice and equality,” Energy Secretary Flavia Royon, who started last week, said at the press conference.

Argentine Economy Minister Sergio Massa promised to meet the 2.5% primary fiscal deficit target this year in the IMF program. Meeting the target requires painful spending cuts that, while seen by investors as necessary to stabilize the economy in the medium-term, will likely face pushback from citizens already enduring 70% inflation this year.

Cutting energy subsidies is deeply unpopular in Argentina, where the government spent almost $11 billion last year to keep bills nearly flat despite high inflation. Except for Venezuela, Argentina spends the most of any country in Latin America on utility subsidies, while home bills are among the lowest in the region, according to the IMF’s most recent review of the agreement.

The pace of subsidy cuts was one of the last hold ups in the government’s two-year negotiation with IMF staff. Former Economy Minister Martin Guzman, who negotiated the deal, abruptly resigned in July citing a lack of support to implement such measures. A long history in Argentina of utility price hikes fueling high inflation makes the topic politically costly. The previous government of President Mauricio Macri lost the 2019 election in part due to sharp price hikes on gas, electric and water bills to comply with its IMF deal at the time.