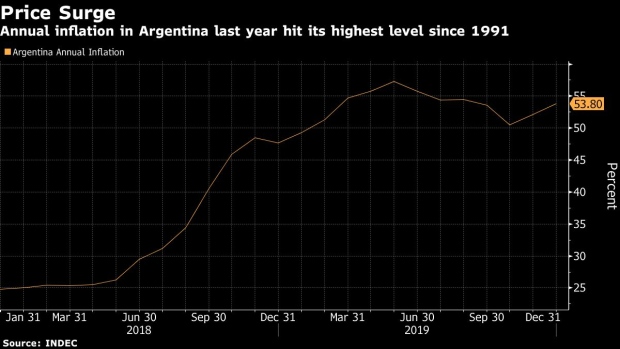 (Bloomberg) -- Argentina recorded its biggest increase in prices last year since 1991 when the South American nation was recovering from hyperinflation.

Consumer prices rose 53.8% in December from the same month a year earlier, according to government data published Wednesday. On the month, prices rose 3.7%, slower than the median forecast of 4.05% in a Bloomberg survey.

The price surge last year was one of the deciding factors in Argentina’s presidential election, in which President Alberto Fernandez soundly defeated his pro-market predecessor, Mauricio Macri. During Macri’s government, a currency crisis and spending cuts to subsidized public transportation and utilities triggered high inflation. The peso is down 69% since the start of 2018, the most in emerging markets.

Fernandez’s new government appears more focused on kickstarting economic growth via consumer spending than cooling prices. Since his administration took office Dec. 10, the central bank has trimmed interest rates and sought to provide cheaper credit to small- and medium-size businesses. However, central bank President Miguel Pesce said slowing inflation is one of the bank’s objectives and the government has frozen prices on some staple food items.

Argentina’s government under former leader and current Vice President Cristina Fernandez de Kirchner published inaccurate inflation and growth data, according to the IMF’s censure imposed in 2013. The IMF lifted its censure declaration once Macri, her successor, overhauled the statistics agency, INDEC, and restored its credibility.

Despite an official data blackout in 2014 and 2015, a range of private economists’ inflation estimates during that period showed no consensus as high as 53%. Last year’s inflation far outpaced price increases during Argentina’s historic crisis in 2002, when prices rose 26%, according to IMF figures.

Argentina’s economy is poised to contract in 2020 for the third straight year and unemployment remains high, as Fernandez seeks to renegotiate debt with private creditors and the International Monetary Fund.

To contact the reporter on this story: Patrick Gillespie in Buenos Aires at pgillespie29@bloomberg.net

To contact the editors responsible for this story: Juan Pablo Spinetto at jspinetto@bloomberg.net, Robert Jameson