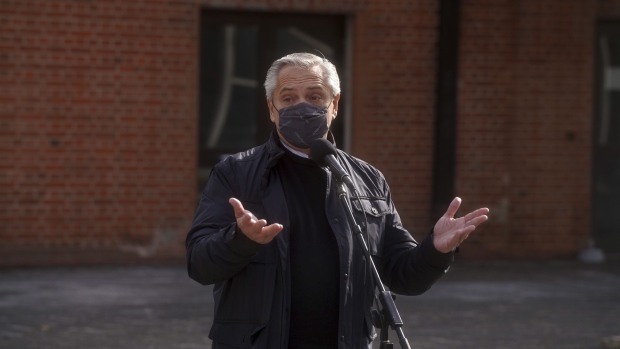 Alberto Fernandez, Argentina's president, speaks to members of the media after casting a ballot at a polling station during the primary elections in Buenos Aires, Argentina, on Sunday, Sept. 12, 2021. Argentines are voting in a primary election Sunday that will serve as early test on the political strength of President Alberto Fernandez’s left-wing ruling coalition. , Bloomberg

(Bloomberg) -- Buenos Aires Deputy Maximo Kirchner, the son of Argentina’s vice president, said changes to the cabinet appointments were based on the decision of President Alberto Fernandez.

“The issue of the names and whether changes were sufficient or not, that’s decided by Alberto -- that is clear,” Kirchner said in a radio interview.

Fernandez reshuffled his cabinet on Friday, days after the Vice President Cristina Fernandez de Kirchner publicly blamed him for the country’s political crisis that followed the government’s electoral defeat last Sunday. Fernandez named Juan Luis Manzur as the new cabinet chief, in line with the suggestion by the vice president, along with several other ministers and the press secretary.

The Buenos Aires deputy said he would support the new appointees now that that the political turmoil has ended. The recent elections were “complex” due to the Covid-19 crisis, he said, defending his mother, who was a former president, saying she “has always been in favor of the institutions.”