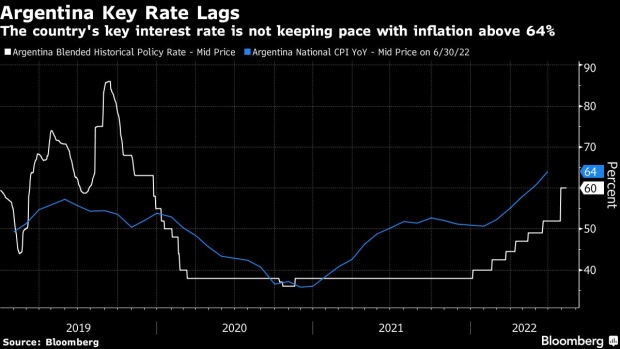 The Central Bank of Argentina in Buenos Aires, Argentina, on Friday, Feb. 25, 2022. Argentina's economy capped a strong second half of growth as it emerged from a long recession last year ahead of an expected new deal in the coming weeks with the International Monetary Fund. , Bloomberg

Officials raised the rate by 950 basis points, the eighth increase this year, according to a statement. It follows an outsized, 800-basis point hike just two weeks ago. Until now, central bank officials only raised rates about once every month.

Earlier, the central bank had told traders that it was offering its Leliq note at the same rate, according to people with direct knowledge of the matter who asked not to be named. It marks the largest increase since August 2019.

Argentina’s annual inflation surged in July, rising 71% from a year ago, the highest level in about 30 years, according to government data published Thursday.

surged in July past 70% in July, according to government data published Thursday, after political turmoil fueled price spikes and a currency rout.

New Economy Minister Sergio Massa, the third since early July, is renewing the government’s battle against inflation with a more conventional approach. Along with raising rates, Massa also committed to not ask the central bank to print any more money to finance government spending this year, a chronic source of inflation the past two years.

Thursday’s rate hike also marks a complete eclipse by the central bank since its president, Miguel Pesce, took over two and a half years ago. Pesce gradually cut the benchmark rate from 63% in December 2019 to as low as 36% before starting to tighten policy this year.

“We believe recent policy moves -- especially the 1750 bps in rate hikes since Sergio Massa was announced as the new, empowered economy minister -- may help bring down inflation and inflation expectations. The magnitude will depend on whether Massa will follow through on his pledge not to rely on money printing to fund the government with measures that reduce the fiscal deficit.”

Raising rates closer to annual inflation levels is part of the government’s effort to encourage savers to stick with pesos. It’s also a key pillar of Argentina’s $44 billion agreement with the International Monetary Fund, which calls for so-called positive rates.

Latin American central banks started tightening monetary conditions earlier than most global peers, but prices continue rising above target in the region. Mexico’s central bank raised its key rate to an all-time high of 8.5% on Thursday, while analysts also expected Peru’s monetary authority to increase borrowing costs later in the day too.