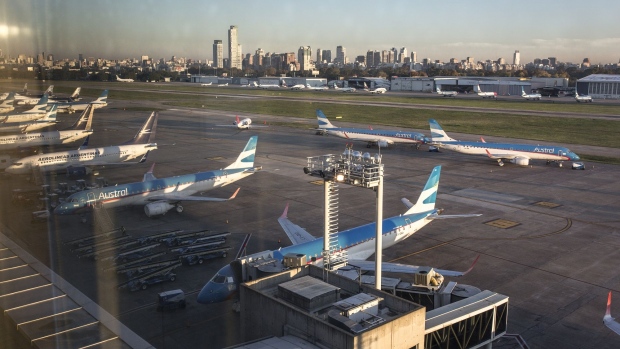 Boeing Co. aircraft, operated by Aerolineas Argentina SA, stand at Aeroparque in Buenoes Aires, Argentina, on Monday, May 18, 2020. In Argentina, home to the strictest travel ban in the Americas with flights grounded until Sept. 1, state-run carriers Aerolineas Argentinas and Austral Lineas Aereas are merging to survive. , Bloomberg

(Bloomberg) -- Argentina’s decision to limit the number of international travelers in a bid to curb the spread of Covid risks stranding thousands of its citizens abroad, according to airline industry groups.

Argentina’s government, which has already banned foreign tourists from entering the country for months, announced late Friday that only 600 travelers per day will be allowed to arrive on international flights, down from a previous quota of 2,000 people. The measure, in effect since Saturday, is intended to reduce the circulation of people amid growing numbers of Covid-19 cases in the country.

The International Air Transport Association, among other airline groups, called for an urgent meeting with government officials to discuss the matter. IATA represents 290 airlines across the world.

“By taking such unilateral and short-notice decisions, the government risks further isolating the country,” Peter Cerda, IATA’s regional vice president for the Americas, said in a statement over the weekend. The measure “will force airlines to strand thousands of passengers, mainly Argentinian citizens and residents, outside the country.”

A spokesman for Cabinet Chief Santiago Cafiero, whom IATA addressed a letter to, didn’t respond to a request for comment. A Transportation Ministry spokesman said its officials don’t have meetings planned with IATA, nor does Argentina’s aviation regulator ANAC.

Cerda added that the industry can’t implement the measure in such short notice and that the government must advise how to distribute the 600 allowed seats among airlines. The Latin American And Caribbean Air Transport Association, or ALTA, said the measure “will continue diminishing the availability of jobs and income” in Argentina, considering the impact on airlines and tourism.

Read More: The Best And Worst Places to Be as The World Finally Reopens

As many countries emerge from the pandemic, Argentina is seen as the worst among 53 countries to be, according to a Bloomberg ranking that takes into account the status of the Covid-19 outbreak, the quality of life and progress in the reopening of the economy. Argentina’s flight capacity is down 82% from pre-pandemic levels, even before the impact of the new measure.

Argentina has adopted strict travel measures during the pandemic, halting nearly all international and domestic flights for months last year. Covid-19 cases have recently soared again and the country ranks among the top 20 nations in deaths per million people, according to data compiled by Bloomberg.