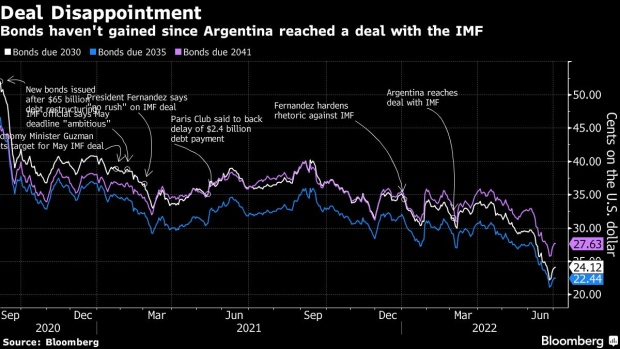 The Ministry of the Economy in Buenos Aires, Argentina, on Friday, Feb. 25, 2022. Argentina's economy capped a strong second half of growth as it emerged from a long recession last year ahead of an expected new deal in the coming weeks with the International Monetary Fund. , Bloomberg

The country’s unofficial exchange rate, locally known as “dolar blue”, weakened as much as 14.6% to 280 pesos per dollar in Buenos Aires, according to website Dolarhoy.com. While US bond markets were shut for a holiday, locally-traded assets indicated investor wariness on the new minister. Rofex future contracts on the official peso exchange rate due in October weakened 2% to 168 pesos per dollar, while the S&P Merval benchmark stock index fell 3.4% at the open before paring losses.

Argentina’s President Alberto Fernandez tapped Batakis after Guzman’s resignation deepened a political crisis that has been hurting the country’s finances and markets. Batakis, a low-profile policy maker close to the more heterodox wing of the ruling coalition, inherits a long list of economic challenges, including annual inflation over 60%, and the government’s $44 billion program with the International Monetary Fund, which just passed its first review.

“Batakis is a highly educated bean counter with more hands-on experience with managing fiscal affairs than her predecessor,” analysts led by Joaquin Bagues at broker Portfolio Personal Invesiones wrote in a note. “However, she does not appear to have Guzman’s arrogance and ego, and her history reflects a professional survival instinct that includes absolute obedience” to leftist Vice President Cristina Fernandez de Kirchner.

Argentina’s global bonds remain deep in distressed territory, just above 20 cents on the dollar, while the local debt market has been mired in a crisis, with investors reluctant to roll over maturing debt into longer dated government bonds. Euro-denominated notes due 2030 slipped 0.3 cent to about 21 cents on the euro, as of 1:15 pm in Buenos Aires.

The country’s parallel exchange rate, known locally as the blue-chip swap, slumped to a record low of 252 pesos per dollar last week. The rate, derived from buying securities locally and selling them abroad, will resume trading tomorrow when US markets open. Analysts from firms including BTG Pactual and Alberdi Partners have already begun to warn in their reports that they expect a official peso devaluation in the second half of 2022.

Batakis needs to address rising market concerns regarding the government’s ability to pay even its peso-denominated debt, must tackle rising inflation...and find solutions for these problems that are politically viable in the context of a fractured coalition with just fifteen months until the next presidential election.

Batakis’ appointment is seen as a win for the far left-leaning faction of Argentina’s ruling coalition aligned with Kirchner, which could endanger the success of the nation’s $44 billion lending program with the International Monetary Fund, JPMorgan Chase & Co. economists Diego Pereira and Lucila Barbeito wrote in a note.

“Batakis’ appointment seems to signal that the balance of power has tilted to the Kirchnerist side,” Pereira and Barbeito wrote. “We would expect a more expansive fiscal stance, and potentially a renegotiation of the IMF program amid brewing imbalances and wider FX gap.”