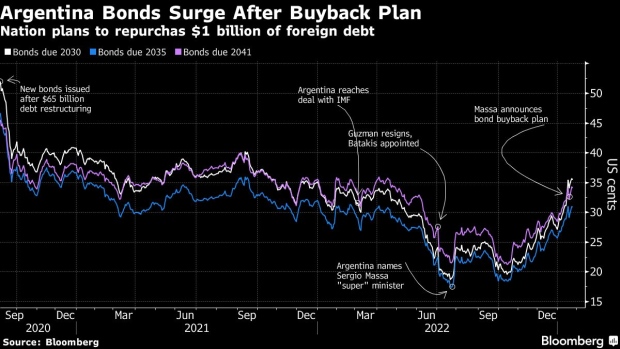 (Bloomberg) -- Argentina’s plan to repurchase $1 billion of overseas bonds meets the definition for a default, according to Moody’s Investors Service.

The credit assessor sees the nation’s strategy of buying back short-dated dollar bonds — primarily those due in 2029 and 2030 — through direct market purchases as tantamount to a “distressed exchange and hence a default under our definition,” Moody’s analysts including Jaime Reusche wrote in a note.

Moody’s still scores Argentina at Ca, the second-lowest rating. It has a stable outlook on the nation.

“The operation comes at the cost of scarce foreign currency that is pressuring the country’s external finances, while doing little to support the sovereign’s repayment capacity in 2024 and beyond,” the Moody’s analysts wrote on Jan. 24. “Government authorities have not specified how much of the $1 billion will be allocated to purchases of each bond, nor the target date of when the buyback process will cease.”

While the plan sparked confusion among investors who pointed out the government’s limited funds, it also triggered a jump in the nation’s dollar bonds. That leaves some on Wall Street skeptical of a default designation.

“The IMF has been consulted by Argentina and seems to have given a green light for the buyback,” said Stuart Sclater-Booth, a portfolio manager at Stone Harbor Investment Partners in New York. “There is no coercion at all on the part of Argentina, and other sovereign credits — such as El Salvador — have bought back their debt to good effect.”

S&P Global ratings does not classify the exchange as distressed because the government is unlikely to default on the bonds in the coming months, according to a Jan. 20 report written by analysts including Lisa Schineller.

“While participating bondholders would receive less than originally promised, at current and expected bond prices under our methodology, we don’t consider this transaction to be a distressed exchange,” Schineller wrote. “Absent participation, we don’t believe this would lead to a conventional default on these bonds.”

(Updates with quote from S&P analyst in the final paragraph)