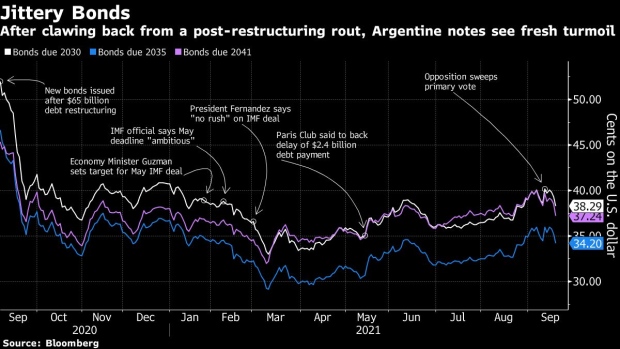 The nation’s $10.5 billion in bonds due 2041 slid as much as 1.3 cents to 37 cents on the dollar, while the unofficial peso exchange rate, known as the blue chip swap, weakened 1.5% to 184 pesos per dollar. U.S.-traded shares also fell as much as 11%, with the local benchmark index posting the worst returns among indexes in the Americas amid risk-off sentiment.

The cabinet reshuffling, announced late Friday, is part of a move to try to put an end to a political crisis that has consumed the ruling coalition following a larger-than-expected defeat in primary elections on Sept. 12. With the government weakened, the results of the vote cast uncertainty over the policy direction Fernandez will take in the last two years of his mandate, and increase the chance he will lean on populist economic measures to win votes ahead of November’s midterms, according to Bloomberg Economics.

“With no access to international capital markets, the odds that Argentina will deepen its reliance on money issuance to fund a large public deficit, and on unorthodox measures such as price and export controls as a tool to curb inflation have increased.”

On Friday, Fernandez announced the replacement of five ministers and his chief press adviser, after Vice President Cristina Fernandez de Kirchner publicly blamed him for not reacting fast enough to the election results. The new officials include Tucuman Governor Juan Manzur, who will replace Santiago Cafiero as cabinet chief, and Anibal Fernandez, a former cabinet chief under Kirchner, as security minister.

In a presidential decree published Saturday, the government also said that $4.3 billion in Special Drawing Rights granted by the IMF last month can be used by the Central Bank to expand the issuance of pesos and finance Treasury expenses.