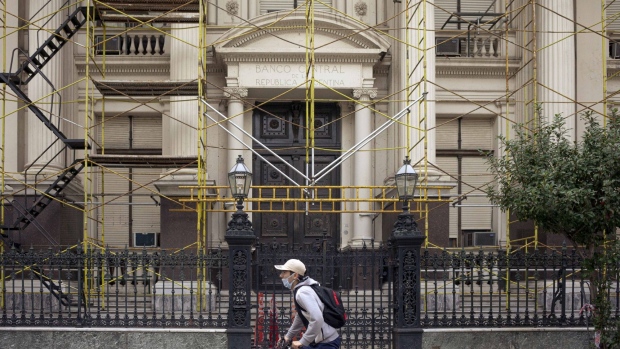 A cyclist wearing a protective mask cycles past the Central Bank of Argentina in Buenos Aires, Argentina, on Friday, June 19, 2020. Coronavirus cases may peak in Argentina sometime between the end of June and beginning of July despite cases and virus-related deaths increasing at a faster pace, according to Health Minister Gines Gonzalez Garcia. , Bloomberg

To do so, it raised a repo rate used by banks by 3 percentage points to 27%, and lowered its benchmark Leliq rate by 1 percentage point to 37%, according to a statement late Thursday. The rates had diverged at the start of the coronavirus pandemic as the government sought to mitigate the economic effects of the virus, the central bank said in its statement.

With the country’s borrowing costs above 13 percentage points over U.S. Treasuries on global markets, the country has been printing money to finance its virus stimulus plans. The latest decision aims to lower the cost of absorbing pesos from the economy, also known as sterilization, the statement added.

“The idea behind this is to create incentives for banks to unwind their holdings in Leliq and instead, invest in Treasury bonds,” said Federico Furiase, director at consulting firm Eco Go. That will allow the government to access pesos locally rather than to have to resort to monetary issuance to finance its deficit in the very short term, he added.

The move also marks the second increase for the repo rate in one week. On Oct. 1, it announced that it was raising repo rates to 24% up from 19% and creating savings instruments with rates that exceed inflation, in an effort to encourage Argentines to save and invest in pesos.

The central bank added that it would be more flexible with companies looking to restructure their foreign debt. On Sept. 15, it said that it required companies with debt maturities larger than $1 million per month until March 31 to present a restructuring plan.